After four rounds of the Southern Premier League and Women’s Premier League, the table is settling in to reflect the high scoring games from the last few weeks.

With some frosty weather this week in Dunedin, but a lack of rain, grounds have still been good to use for outdoor training.

We have two SPL teams and one WPL team travelling to Central this week for Queenstown and Wanaka home games.

In the Women’s Premier League, Roslyn Wakari are back on home soil at Ellis Park against top of the table Dunedin Technical AFC.

Both teams were having a great start to the season and had placed in the top two spots on the table, so it will be a great game to get along to. 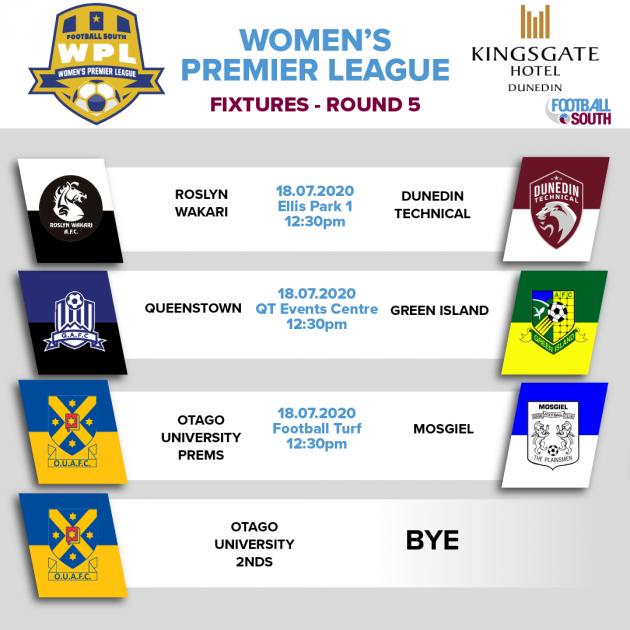 Roslyn head coach Hamish Philip said: “leading into what is a massive game, there is a mixed bag of emotions, mainly pride in our team.

“We have been playing well as a team but there is still room to improve, and the girls are pushing each other more than ever.”

Philip acknowledged that Tech were a strong team and you “just have to be brave enough to take it to them… and that we will.”

Roslyn’s training had been very positive this week, with great attitudes all round. The team was without Grace Cotter, which opened up an opportunity for another player to step up.

“We are looking forward to our game and hope to put on a show.” Philip said.

Queenstown AFC are hosting Green Island AFC at the QT Events centre, with GI travelling up Saturday morning, giving Queenstown the morning to ease into their warm ups without making the journey.

“As always we are looking forward to the weekend,” head coach Mark Ford said.

“The team have responded well to how the weather affected training and are pretty buoyant after last week's win.”

Queenstown were aware that Green Island were always well prepared and he was going in confident, yet expecting a close and competitive game, Mark said.

“Uni have been training well and there is a good buzz in the group at the moment. Spirits are high, and we hope to come away with a good result.”

Key player Nadege Salvador is still 50:50 with an ankle injury but the rest of the squad was available for selection and fighting for starting line-up. Uni were hoping to keep the pressure up on the teams in the top three, and keep their heads in what was promising to be a tight race this season.

Otago University 2nds have the bye this week, with an extra week to focus on their round-6 game against Roslyn Wakari. 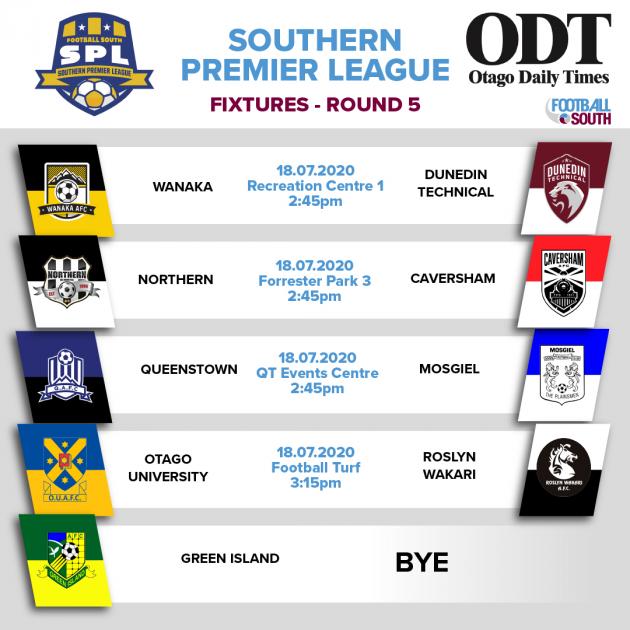 “We have the experienced Pleskun, Grehan and Carmichael returning to bolster playing options, and have a gained confidence with a victory on the road last weekend.”

Bell was most pleased with the character his team showed last weekend to over turn a 1-0 deficit at half time and go on to get the three points.

Coach Bell understands Tech are a formidable opponent, and last week's loss to GI was an even battle where tech only conceded a second goal in the last couple of minutes.

Malcolm Fleming obviously has them working very hard as a unit, and with pivotal players like Neaverson, Lockhart and Hayman, they have valuable experience who will galvanise their team, he said.

“Its a big game for both teams and a match both teams must win if they are to have a slim chance of making the top four.”

Northern AFC play at Forrester Park against Caversham AFC. Both clubs are bottom of the table. It will be a competitive game, with both teams itching to get those three points.

Northern have had some fundamental changes within their team within the last couple of weeks, including new coach Arran Wilkinson, who we are looking forward to hearing from after the Saturday game.

Queenstown AFC vs. Mosgiel at the QT events centre, will be a great challenge. With both teams sitting in the top four, and only losing one game, it is expected to be an evenly-challenged fixture, and will make for a good hustle.

“Mosgiel are in some decent form and they are a very strong side,” Queenstown head coach Jamie Whitmarsh said.

“We unfortunately haven’t trained for three weeks due to waterlogged fields, and floodlight failures, along with the bye… so our preparation and game time for this weekend will only start this Thursday (weather dependant) which isn’t ideal.”

School holidays were great for the Central area, but not so much squad-wise with players having the opportunity to work and move on from Queenstown due to Covid-19.

Whitmarsh was still looking forward to the weekend game, and playing at home.

“It’s a big game and we will do our best. Hopefully on the day we can put on a performance we are happy with.”

Otago University play Roslyn Wakari on the Football Turf this weekend, currently sitting fifth and sixth on the table, both teams will be needing those three points to bump up into the top four.

Uni head coach Darren Hart said it had; “been a rough week, with almost half the squad out sick as flu/stomach bugs have been circulating around the Uni at the moment.

“We are hoping that our sick players will get right for the weekend.”

Hart is keen to get back on the turf, as the game vs. Mosgiel was the first on a grass pitch since September last year. He said due to this, Uni probably didn’t adjust as quickly as we would have liked due to the different surface.

“We are really just looking to get back to winning ways with hopefully enough players to pick from, we know the pitch and surface and it lets us play the way we want to.

“Alongside the sickness we have a few players potentially out from injuries sustained at the weekend but will need to make calls on those tomorrow, hopefully they will be OK to play.”

Hart was disappointed to lose last week, but as Uni have only been training with a full squad for two weeks, and its only their second game this year.

Hart said they; “probably need to be realistic about where we are but will be targeting the three points at the weekend.”

Top of the table Green Island AFC have a bye this weekend, but will be back in round-6 with a Sunnyvale home game against Wanaka AFC.

All the best to all teams for round-5. Please travel safe, drive to the conditions, play fair, and play some great football!.