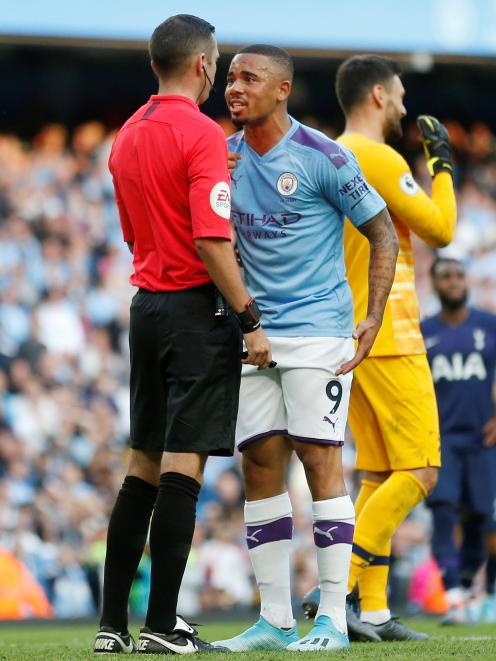 Gabriel Jesus of Manchester City angrily remonstrates with referee Michael Oliver after VAR ruled out his late goal for handball. Photo: Reuters
Manchester City were held to a controversial 2-2 draw at home to Tottenham Hotspur on Saturday, allowing Premier League title rivals Liverpool, who won 2-1 at Southampton, to gain an early two-point advantage.

Only a point separated the two sides at the end of last season, with City winning their final nine home games, but their first outing of this campaign at the Etihad ended in a draw after a VAR review rubbed out Gabriel Jesus's injury-time effort.

The Brazilian drove in what looked like the winner but, as City celebrated, VAR officials spotted a handball by City defender Aymeric Laporte before Jesus struck home.

The incident had echoes of City's Champions League exit to Spurs in April, when they also had what would have been a decisive late goal ruled out by VAR.

"It was deja vu, deja vu," said City manager Pep Guardiola, unhappy at what he saw as inconsistency in the use of the video system.

City took the lead in the 20th minute through a Raheem Sterling header but three minutes later Erik Lamela brought Spurs back level.

Sergio Aguero restored City's lead 10 minutes before the break, with the excellent Kevin De Bruyne once again the provider with a low ball.

Mauricio Pochettino made an inspired Spurs substitution when he sent on Lucas Moura in the second half and the Brazilian scored with his first touch, beating Kyle Walker to head in a Lamela corner.

But despite an outstanding contest, the game will inevitably be remembered for the late overturning of Jesus's goal.

A nervy Liverpool, meanwhile, made it two wins from two as Sadio Mane scored against his former club.

Juergen Klopp's side, who had been in action in Istanbul on Wednesday when they beat Chelsea in UEFA's Super Cup, struggled to get going at St Mary's but produced a moment of quality at just the right time, Mane brilliantly giving them the lead on the stroke of half time.

Mane's 20th goal in all competitions in 2019 settled Liverpool who were vastly improved after the break, with Roberto Firmino making it two after capitalising on a defensive mistake from Saints.

Danny Ings's late goal against his former club was mere consolation for Southampton as Liverpool made it 11 consecutive Premier League wins, equalling their best winning streak in the competition.

"Once we scored the first goal it was easier for us. I'm sorry it is against my old team and sorry I have to score but I'm wearing a Liverpool shirt now," said Mane.

Earlier, Arsenal also kept up a 100 percent record but made hard work of getting the better of a determined Burnley side at the Emirates, with Pierre-Emerick Aubameyang's seventh goal in four appearances against Burnley earning Arsenal a 2-1 win. 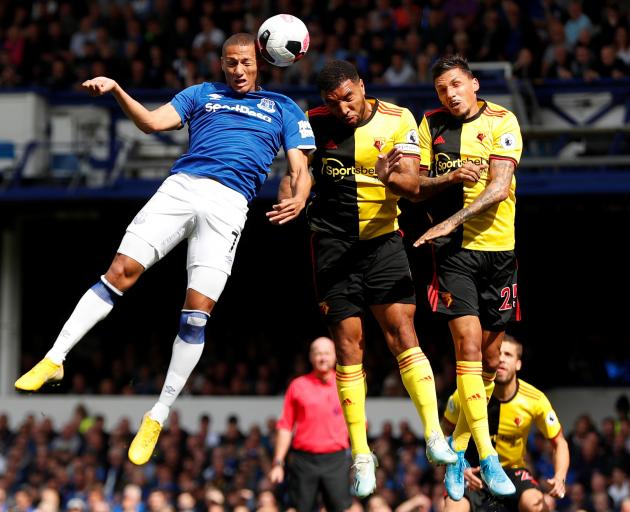 Everton's Richarlison rises high to win a header against Watford's Troy Deeney and Jose Holebas. Photo: Reuters
Burnley, though, were level before half time through Ashley Barnes, who scored his third goal of the season from close range.

After the break, Ceballos continued to stand out, setting up Aubameyang for his superb winner in a match which saw Burnley have more shots at goal.

"In a lot of moments we couldn't impose our gameplan because they pushed and their gameplan was a struggle for us," Emery said.

Everton were far from their best against manager Marco Silva's former side Watford, but Brazilian Bernard's first home Premier League goal was enough for the hosts to secure the 1-0 victory.

A penalty conceded inside 40 seconds set Aston Villa on the back foot against Bournemouth, Josh King converting, before Harry Wilson put the visitors 2-0 in front.

Villa, who also lost their opening match, piled on the pressure in the second half but Douglas Luiz's 30-yard stunner was all they could muster in reply.