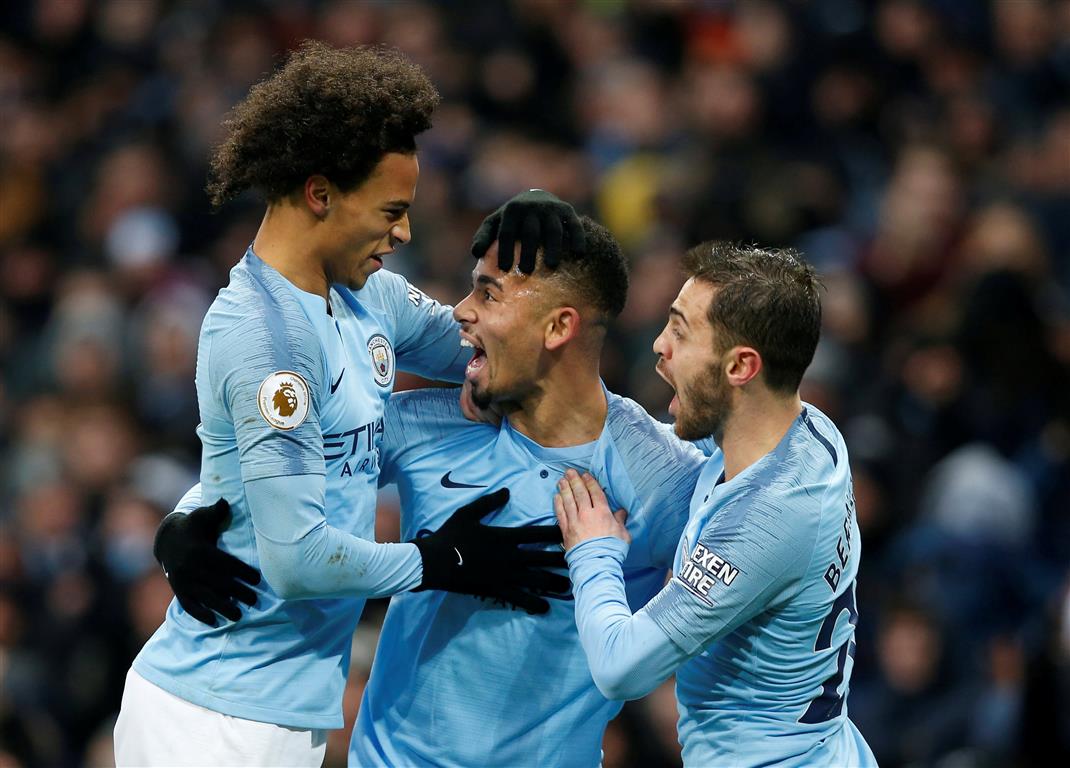 Manchester City's Gabriel Jesus (C) celebrates with Leroy Sane (L) and Bernardo Silva after scoring their first goal against Everton. Photo: Reuters
Gabriel Jesus scored twice in Manchester City's 3-1 victory over Everton at the Etihad Stadium as the champions took full advantage of Liverpool's inactivity to return to the top of the Premier League.

The home victory was sealed by a strike from substitute Raheem Sterling as City quickly banished memories of last week's defeat at Chelsea to move two points clear of Juergen Klopp's unbeaten side, who entertain Manchester United on Sunday (local time).

Tottenham Hotspur were the only other team in the top five to play, edging Burnley 1-0 with an injury-time strike from substitute Christian Eriksen, while Wolverhampton Wanderers, Crystal Palace, Newcastle United, Watford and West Ham United all won too.

There was good news for Manchester City with the return from a knee injury of Kevin De Bruyne, who played 15 minutes as a second-half substitute in his first game for six weeks.

Sergio Aguero was also back on the bench after his thigh problem although Jesus proved the perfect deputy with a sharp left-footed finish in the 22nd minute and a 50th-minute header to register his first Premier League goals since August.

City manager Pep Guardiola was delighted with the Brazilian's performance. "He showed fight and personality, he is a young player and has to improve many things. It is good for his confidence," said the Spaniard.

Guardiola, whose team have 44 points from 17 games while Liverpool have 42 from 16, said he was looking forward to tuning in to Sunday's clash at Anfield. "Yes it is a nice game to watch," he said.

At Wembley, a Burnley side inspired by goalkeeper Joe Hart thought they had secured a point with an impressively resilient performance that frustrated Spurs.

Yet Eriksen, who came off the bench in the 65th minute, finally found a way past the former England keeper in the dying seconds to secure the three points.

"Every time you come on you want to make an impact. To score in extra time was extra nice," said Eriksen.

Wolves beat Bournemouth 2-0 with goals from Raul Jimenez and Ivan Cavaleiro to win a third successive top-flight game for the first time since 1980 and move into seventh place.

Wolves manager Nuno Espirito Santo was delighted by the way his side braved the elements on a bitterly cold day across England.

"In this weather, with the wind, cold and rain and against Bournemouth -- I'm very proud. We did a fantastic job," he said.

The two sides had never met at this level before but the result was seldom in doubt and Bournemouth continue to drop down the table after losing a sixth game out of seven.

Below them, Cardiff City remain in the thick of the relegation fight after losing 3-2 at Watford, a game graced by a stunning opener from the home side's Gerard Deulofeu, who slipped past two defenders in the box before drilling a fine finish past goalkeeper Neil Etheridge.

Watford's Portuguese youngster Domingos Quina, 19, scored his first Premier League goal before Cardiff fought back with two goals in the last 10 minutes but were unable to stop the home side winning their first league match in seven.

Crystal Palace finally broke their curse of not being able to win without their talismanic winger Wilfried Zaha in the side as they beat Leicester City 1-0.

The Londoners, who last won without the suspended Zaha in September 2016, had Luka Milivojevic to thank for a win that moves them clear of the relegation zone.

Newcastle also boosted their survival chances with an opportunistic 1-0 victory at strugglers Huddersfield Town. Salomon Rondon scored the only goal from a counter-attack in the second half.

"Against a team so close to us in the table, and to get three points, it was a good achievement," said Newcastle manager Rafa Benitez.

Fulham remain at the bottom after losing 2-0 at home to resurgent West Ham United, who have won four successive league games for the first time in four years. Robert Snodgrass and Michail Antonio scored the goals.