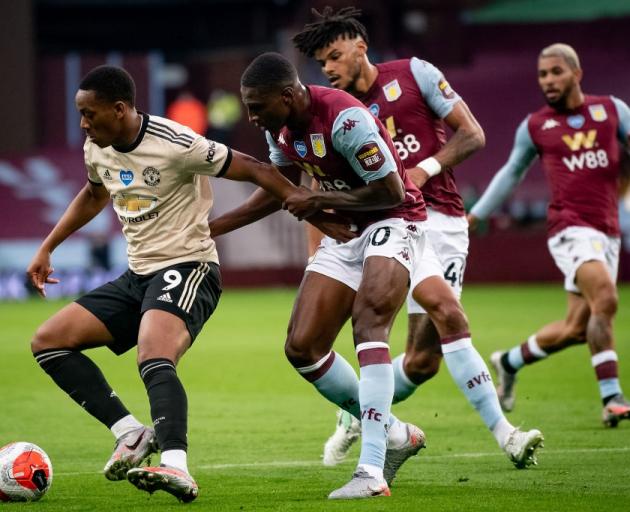 The victory means United, who are now unbeaten in 17 matches in all competitions, became the first team since the formation of the Premier League to win four consecutive matches by a margin of three or more goals.

Ole Gunnar Solskjaer's side are fifth in the table, one point behind fourth-placed Leicester City and two adrift of Chelsea in third with four games left.

United went ahead in the 27th minute after a debatable penalty award when referee Jon Moss ruled that Ezri Konsa had brought down Bruno Fernandes just inside the box. The Portugal international rose to convert the spot-kick.

Villa keeper Pepe Reina was kept busy, dealing with efforts from Anthony Martial and Mason Greenwood while Fernandes missed a great chance when he headed over when unmarked with the goal at his mercy.

There was no dispute about United's second goal, though, just before the break, a thundering drive from Greenwood after good work from Martial.

The 18-year-old has now scored 16 goals in all competitions this season and is rapidly emerging as one of the most exciting young talents seen at United for years.

"Ever since I came to the club, the youth team beat Chelsea and he scored three, I think, I watched that game on video and it's natural for him to score goals and handle the ball," said Solskjaer.

"Now he's playing with better players, enjoying it, just gets on with his job, which he should be, and just enjoying his football," the Norwegian added.

Paul Pogba wrapped up the win against a Villa side, who looked demoralised, when Fernandes played a clever corner deep to the Frenchman outside the box and the World Cup winner placed the ball in the bottom corner past a motionless Reina for his first league goal since April, 2019.

Martial blasted against the bar as United threatened to run riot against Dean Smith's side who are next to bottom on 27 points, four behind 17th-placed Watford.

"It unravelled with the first goal," said Smith.

"I can understand Jon Moss getting it wrong but I don't know what VAR are looking at - it's a disgraceful decision. They have a screen they can go and look at it but they don't seem to be bothered," Smith added.