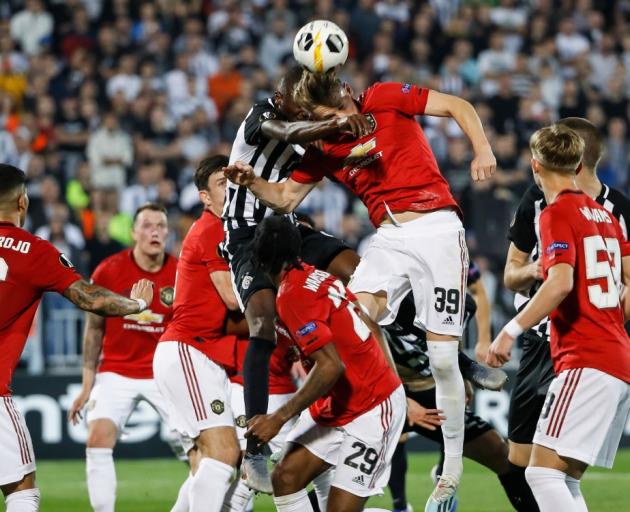 Anthony Martial's 43rd-minute penalty put his side in a commanding position to reach the knockout stages.

The match was played under tight security amid fears of crowd trouble but it produced a cracking atmosphere as Partizan coach Savo Milosevic's appeals to home fans to refrain from offensive chants proved successful.

United top of the group on seven points from three games, two ahead of Dutch side AZ Alkmaar who thrashed Kazakhstan's Astana 6-0 at home. Partizan have four points and Astana none.

The first two chances fell to United as left back Brandon Williams glanced a close-range header wide at the far post after Juan Mata floated in a free kick before Jesse Lingard hit the post as he picked up a loose ball on the edge of the area.

Partizan striker Umar Sadiq rattled the woodwork with a fierce shot from 25m and Japanese winger Takuma Asano fired just wide as the home side came to life, only to fall behind just before halftime.

Williams was fouled by Nemanja Miletic as he raced down the left flank and Martial coolly converted the spot-kick when he sent Partizan keeper Vladimir Stojkovic the wrong way.

Partizan came out with renewed purpose after the break and Bebras Natcho fired inches wide from a free kick before Seydouba Soumah forced a good save from Sergio Romero following a dazzling solo run through the middle.

The home side had two penalty claims waved away by Spanish referee Xavier Fernandez midway through the second half and United were forced to defend in numbers as Partizan threw men forward in search of an equaliser.

Roared on by their fervent fans, the Serbian side launched a late onslaught and Romero rescued United in the 83rd minute when he kept out Asano's close-range header with a superb reflex save.

Four minutes from time, Natcho shot narrowly over the bar from 20m as the decibel levels in the terraces reached fever pitch and United held on desperately in stoppage time to delight around 2,000 away fans in the Serbian capital.