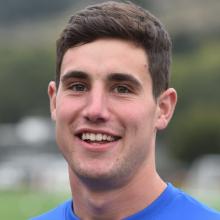 Mosgiel won 1-0 at home, in a match which had plenty of class.

Roslyn started the game well — its midfield creating half chances for Nathan Wilkie and James Govan. Jak Stevenson was threatening going forward from right back, and Luke Clissold had moments of real quality.

A reshuffled Mosgiel midfield three of Alex Cox, Rahan Ali and Matt Kelly was slow to get into the game.

Mosgiel slowly began to gain the ascendancy, moving the ball around looking for an opening. One eventually came in the 23rd minute when Aidan Barbour-Ryan released Cody Brook on the right-hand side. He chopped back on to his left foot to deliver a pinpoint cross which was met by Matt Kelly who headed home into the roof of the net from close range.

The game took a twist in the 39th minute when Brook was shown a straight red card for a studs-up challenge on Roslyn left back Michael Sannum.

Mosgiel changed formation in the second half and set up to defend and counterattack quickly with Cam Anderson providing the outlet.

Roslyn created good chances during the half and, early on, a shot from just inside the penalty box went centimetres wide of Liam Whittaker's goal.

Mosgiel created chances of its own, with Cam Anderson working tirelessly up front, stretching the Roslyn defence and forcing Tom Stevens into a couple of outstanding saves.

There were other chances for both teams but Mosgiel hung on for the win.

It was a feisty, physical affair with some tough tackling.

With Green Island missing Matt Brazier, both sides were evenly matched and it took until the 31st minute for Green Island to take the lead, when Liam Carrington was on hand to finish from close range following a great penetrating run and pass from Eddie Wilkinson.

Northern quickly equalised when Blake Porteous was sent off for a foul. As the last defender, he brought down Northern’s Jameel Geor.

Harry Fraser struck the resulting free kick from 20m past Christian Firth into the bottom corner.

Early in the second half, a free kick awarded to Green Island was struck home by Tom Milton to give the competition leader the advantage again. It then dug deep to keep its 100% record intact in a tight, very physical second half.

In Queenstown, the form book went out the window as visiting Caversham racked up a 9-2 win.

Caversham had been stumbling along this season but found its mojo on Saturday.

Caversham was clinical, scoring four goals in the opening 25 minutes through Connor Neil, Campbell Thompson and a brace to Raven August.

Despite Queenstown being more effective on the break the Caversham defensive unit showed resilience and linked with the midfield to keep the home team at bay.

There was no let-up in the second half when Ben Kiore got in on the act and plundered four further goals. Liam Batts also scored on debut.