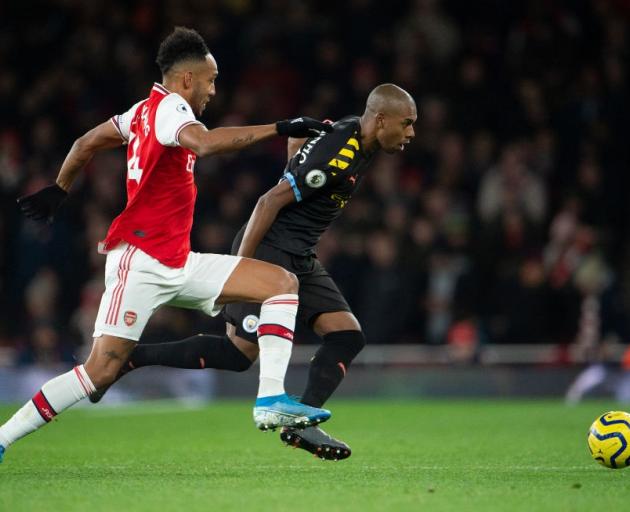 Pierre Emerick Aubameyang of Arsenal and Fernandinho of Manchester City compete for the ball during their sides' last meeting. Photo: Getty Images
The Premier League season will restart on June 17 provided all safety requirements have been put in place, the league has said after meeting with all 20 clubs.

The season will get back under way with Aston Villa v Sheffield United and Manchester City v Arsenal, which are both games in hand.

A full fixture list will then be played on the weekend of June 19-21. All games will be played without fans in attendance.

With the restrictions on the broadcasting of Saturday 3pm (local time) games lifted, the league said all 92 remaining matches will be broadcast live in the UK by its existing broadcast partners: Sky Sports, BT Sport, BBC Sport and Amazon Prime.

The BBC, normally limited to a highlights show, will broadcast Premier League matches live for the first time since the English top-flight broke away from the Football League in 1992. The licence-fee funded network will have four games.

Subscription-based Sky Sports will have 64 of the remaining games with 25 of those matches broadcast on free channels.

The Premier League was suspended on March 13 due to the novel coronavirus pandemic but teams returned to small group training last week and on Wednesday voted unanimously to return to contact training, including tackling.

“Today we have provisionally agreed to resume the Premier League on Wednesday 17 June. But this date cannot be confirmed until we have met all the safety requirements needed, as the health and welfare of all participants and supporters is our priority," said Premier League Chief Executive Richard Masters.

Failure to resume the season could cost the league around £750 million ($NZ1.4 billion) in lost revenue from broadcasters according to British media estimates.

"Sadly, matches will have to take place without fans in stadiums, so we are pleased to have come up with a positive solution for supporters to be able to watch all the remaining 92 matches," said Masters.

“The Premier League and our clubs are proud to have incredibly passionate and loyal supporters. It is important to ensure as many people as possible can watch the matches at home," he added.

Given the additional number of live games on television, the league said kick-offs would "differ from the traditional times."

Liverpool, bidding to lift their first league title in 30 years, lead the standings by 25 points.