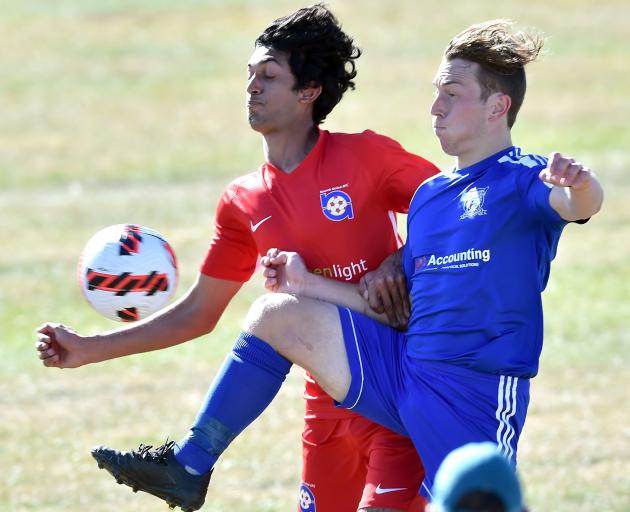 Host Mosgiel led 3-0 after 22 minutes, with a strong tailwind at its back, setting up a resounding 5-0 victory over Nomads United at Memorial Park.

The first came after Isaac Hamilton won the ball in midfield and Rahan Ali slipped a pass to Quarrell.

He beat the offside trap for the first goal on 14 minutes.

Six minutes later Matt Kelly’s perfectly delivered corner was cleared off the line, only for Javier Langley to bicycle-kick it goalward.

Hamilton’s decoy run allowed Quarrell to outpace the defence and power his shot into the bottom corner.

The wind strengthened in the second half and Nomads had the home side under considerable periods of pressure.

Its trio of Daniel Thoms, Caleb Cotton and Declan Hickford were getting opportunities to reduce the deficit but weren’t able to get past gloveman Daniel Robinson.

Mosgiel absorbed the pressure and, in a classic counterattack with 20 minutes left, Kelly beat players on the left flank before squaring the ball to Quarrell to stab home — however, Yaquub Abdi was adjudged to have got the last touch. 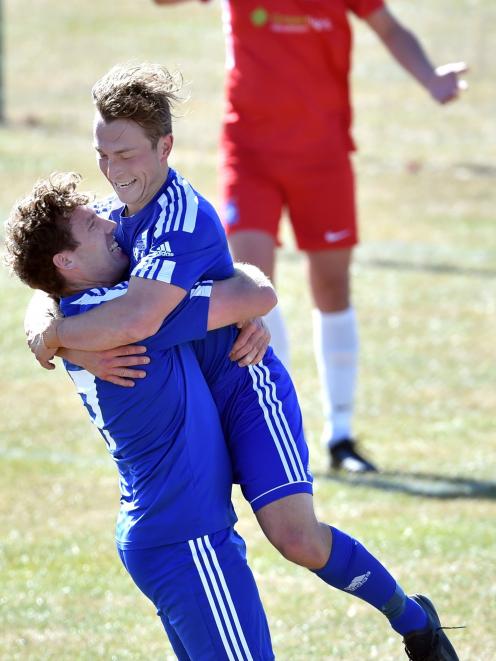 Quarrell (right) and Matt Kelly celebrate one of the Mosgiel goals in the team’s 5-0 win.
Quarrell made sure of his man of the match performance with five minutes to go, when substitute Joe Renwick won the ball and passed the ball through the defence, allowing Quarrell to complete his hat-trick.

Following a tight first half the Royals raced into an early second-half lead when Connor Neil scored from the penalty spot on 52 minutes and a minute later Ben Stanley made it 2-0.

With three minutes left on the clock it looked like the Royals would claim all the points.

However, substitute Fintan Joseph equalised in the 87th minute and a minute later Royals skipper Jared Grove scored an own goal to give Ferrymead an unexpected 3-2 victory.

There was late heartache for Green Island in its match away to Coastal Spirit, the side going down 3-2.

The game was locked at 1-1 with a minute of regulation time left when Cameron Rean scored for the home side, only to see Jake Hodder’s own goal two minutes into added time bring Green Island level.

With virtually the last kick of the game, in the 97th minute, Caversham old boy Michael Hogan shot through a crowded penalty box to give Coastal Spirit its first win of the season.

The Dunedin City Royals also stayed unbeaten with a 12-1 win over Northern.

Emily Morison bagged five goals — four in a six-minute stretch midway through the second half — while Chelsea Whittaker added four.

In the ODT Southern Premier league the Dunedin City Royals took advantage of Northern not playing and went top of the table with a 5-0 victory in Invercargill over Queens Park.

Roslyn Wakari went into third after beating Mosgiel 2-1, while Green Island beat University 3-1 earlier in the week to record its first win.

In the Central Otago derby the points were shared in a 2-2 draw, when Carlos Herrmann scored an injury time equaliser for Queenstown in its match with Wanaka.