Reid to make return to football 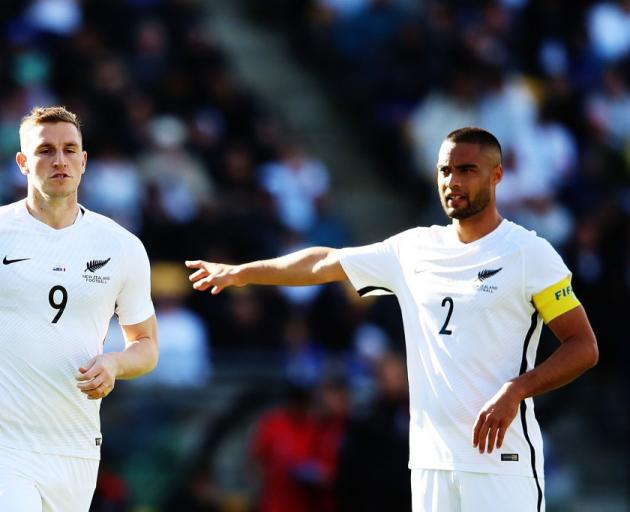 Chris Wood (left) and Winston Reid play for the All Whites during the last World Cup qualifier against Peru in Wellington. Photo: Getty Images
Winston Reid will make his long awaited return to football against Ireland tomorrow, but doubt remains over the participation of fellow English Premier League player Chris Wood.

Reid will captain the All Whites, in what will be just his fourth appearance for New Zealand in the last three years.

It's a massive boost, and a mild surprise, given he hasn't played for West Ham in a competitive match for 18 months due to his ongoing struggles with a knee injury.

The 31-year-old appeared in three pre-season friendlies in July, before another set back, and his only football since then has been 64 minutes for the West Ham under-23 team on November 1.

But Reid has targeted this fixture for months, and will take his place in the familiar No2 jersey at Aviva Stadium.

The optimism over Reid's return has been tempered by the concerns over Wood.

The Burnley striker took no part in training on Wednesday, remaining with the staff on the sideline, in bitterly cold conditions.

Wood withdrew halfway through Tuesday's session complaining of a tight glute muscle, and the problem has yet to settle.

He has had treatment continuously since then, and will be given until the early afternoon on match day before a final decision will be made.

At this stage it seems unlikely that any risks will be taken, especially given how important Wood is to Burnley, though the 27-year-old desperately wants to play.

If he doesn't take the field, New Zealand will have a significantly different look.

Phoenix attacking midfielder Callum McCowatt will lead the line, on debut, though it will be more of a 'false nine' role, and Sarpreet Singh will be shifted from central midfield to a higher role.

Marco Rojas also didn't train on Wednesday and is unlikely to start, with teenager Elijah Just to fill his role on the left flank of an attacking three.

The potential absence of Wood and Rojas, as well as the unavailability of Kosta Barbarouses leave a vast vacuum of experience in the final third, but the swift promotion of McCowatt and Just is part of the brave new world that Hay is such an advocate of.