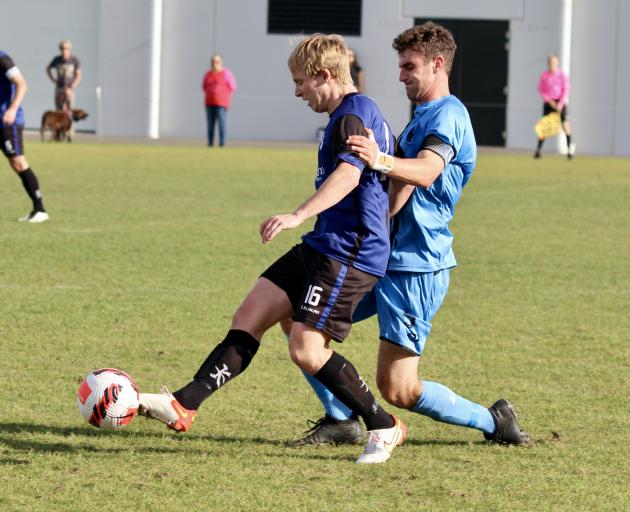 Petersen grabbed a first-half brace of goals to move to sixth-equal spot in the Golden Boot race, with four this season.

His team-mate, En Watanabe, also scored late in the match to go into fourth-equal spot with five goals.

Importantly for the Royals, their second successive win takes them to fourth in the league on 10 points, Ben Stanley’s 19th-minute goal setting the platform.

Former Green Island star Eddie Wilkinson opened the scoring after three minutes, and when Sanni Issa made it 2-0 after 17 minutes, the floodgates threatened to open.

The home side responded with talismanic striker Cam Anderson scoring his first goal of the season on 26 minutes, but Issa scored United’s third goal in injury time at the end of the first half.

Green Island goalkeeper Luke Schaffer-Swan was in inspired form to keep United out, and there was no further scoring in the match.

The floodgates did open when Mosgiel travelled to Cashmere Technical.

Garbhan Coughlan scored a hat trick and team-mate Lyle Matthysen a brace to each record their seventh goal of the season and sit just behind Issa in the Golden Boot race.

Ferrymead came from behind to overcome a spirited Nomads team, winning 2-1 to go to 10 points on the table, equal with the Royals.

In the ODT Southern Premiership, the Dunedin City Royals reserves beat Otago University 2-0 to remain top of the table, courtesy of second-half goals to Sean Cooper and Ash Watson.

Roslyn-Wakari had a close 2-1 win at home over Wanaka thanks to Harley Rodeka’s 75th-minute winner.

Queen’s Park got its first win of the season, David Mwangi scoring a hat trick when beating Green Island 4-2, and Queenstown was too strong for Northern Hearts, winning 3-1.

There was a goal-fest at Memorial Park yesterday.

Home side Mosgiel led 5-2 at halftime before Northern roared back to draw 5-5.

In the ODT Women’s Premiership, both Margi Dias and Chelsea Whittaker fired in hat tricks to lead the Royals to a 7-0 win over Queenstown on Saturday.

It kept the Royals top by three points, and marked a 50th appearance in senior football for Hannah Mackay-Wright.

Mosgiel got its first win of the season, Aine Kelly firing home in the 60th minute to seal a 1-0 win over Northern, and University rebounded from its midweek loss with a 7-2 win over Green Island.

Both leagues are on hold this weekend as teams play Kate Sheppard and Chatham Cup ties.