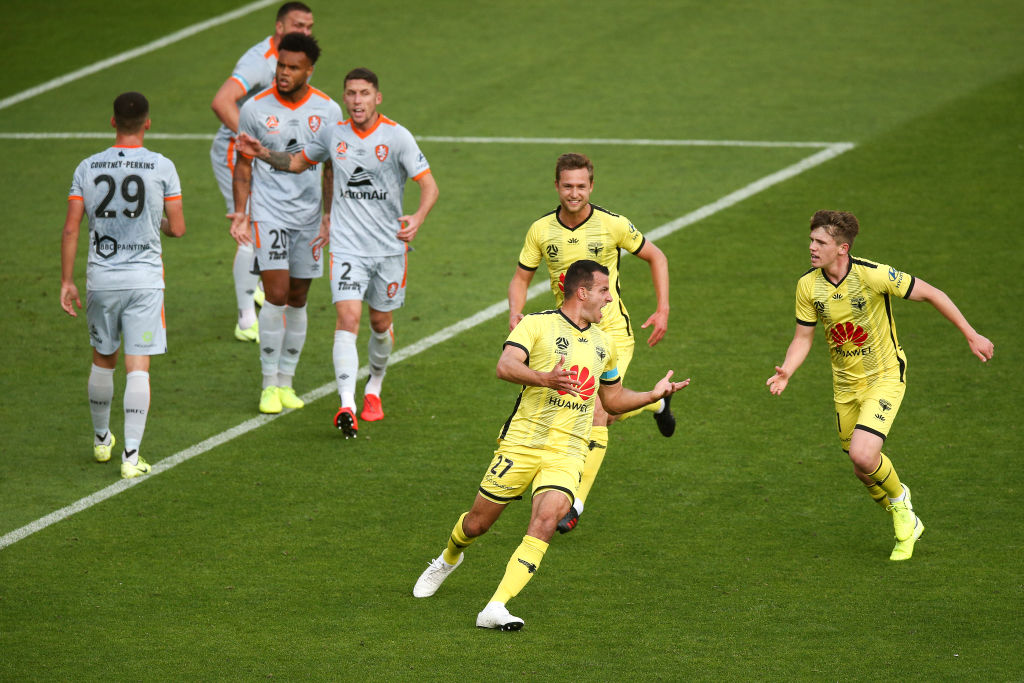 Steven Taylor (c) celebrates after scoring against the Brisbane Roar. Photo: Getty
Captain Steven Taylor pulled off heroic touches at both ends of the park as Wellington Phoenix bagged their first win of the A-League season, 2-1 over Brisbane Roar.

Coming off their worst start to any campaign with a solitary draw through five games, relief was delivered to new coach Ufuk Talay in Wellington on Saturday through goals in each half to classy offshore signings Taylor and Ulises Davila.

Their sharp finishes decided an even contest, with Brisbane slipping back to the inaccurate ways in front of goal that hampered them before last week's thrilling 4-3 upset of Melbourne City.

Talay was pleased his team finally got what they'd deserved through the opening rounds, believing luck hadn't been on their shoulder.

"I'm not relieved. Moreso I think it's been coming," he said.

"We've played some really good football and haven't been rewarded for the way we've played.

"Today, like I said, was like a final, to not get detached from the other teams (on the standings)."

Wellington fielded the same XI that drew with Melbourne Victory two weeks ago while the visitors' lone change was the introduction of left winger Jordan Courtney-Perkins, making him the youngest starting player in Roar history.

The 17-year-old Brisbane academy product enjoyed a solid outing but was guilty of squandering his team's best chance during a crucial early period.

Taylor had put Wellington in front with a header from Davila's cross in the 10th minute, rising above a flat-footed Roar defence.

Minutes later the former Newcastle United centre back denied Courtney-Perkins with an instinctive goal-line clearance after the teenager smashed a close range volley.

Brisbane looked the sharper outfit in the first half but fell away in the second spell after coach Robbie Fowler surprisingly removed impressive Welsh forward Aaron Amadi-Holloway at the break.

Fowler said it was simply a substandard display from his team across the park, lamenting they only came alive late when trailing by two goals.

"We questioned a few of them at halftime, we wanted a reaction. But the changes that we made, we never probably got the reaction from them," Fowler said.

"Sometimes it happens in football where the players are not performing to the best of their abilities for whatever reason.

"And we're missing quite a lot of chances this year. If you're missing chances, you struggle to win games."

Lively Mexican Davila rifled home a left-footed drive from the top of the box for his fourth goal of the season and he looked like adding more as Wellington finished the stronger.

It was the third loss for Fowler's men while Wellington's three points lifts them off the bottom of the ladder, although they'll be back there if Central Coast secure a point on Sunday against Western United.