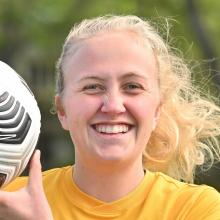 Emily Morison
Reigning champion Dunedin Tech continued its unbeaten run in the league with an 8–1 victory over Roslyn Wakari at Logan Park Turf on Friday night.

Tech stormed into the lead with two goals from Emily Morison in the first five minutes before Roslyn captain Renee Bacon pulled one back for her side with a shot from 30m.

Roslyn had several chances on the counter-attack through the talismanic Bacon and Juliette Lucas, but Tech managed to add to its tally on the stroke of halftime after Chelsea Whittaker calmly converted a penalty.

Four minutes into the second half Nieve Collin made it 5-1, before Ruby Anderson drilled in Tech’s sixth of the night.

A depleted University squad, due to mid-semester break, accounted for Queenstown at Logan Park Turf.

Saffron Millar gave the visiting side an early lead through a well-worked goal.

But Megan O’Malley scored the equaliser through a penalty that Queenstown’s Lana McLuskey managed to get a hand to.

The score remained 1-1 until the dying stages of the game when it seemed that Varsity had a bit more left in the tank.

It sealed victory through some excellent play with Katie Mawdesley hitting in a superb cross in from the right flank that was headed in spectacularly by Toni Power.

At Memorial Park, Mikayla Hawker slotted home a penalty and Kayla Marshall headed in a Ella Scarf-Millar corner to give Mosgiel a 2-0 win over University Seconds.