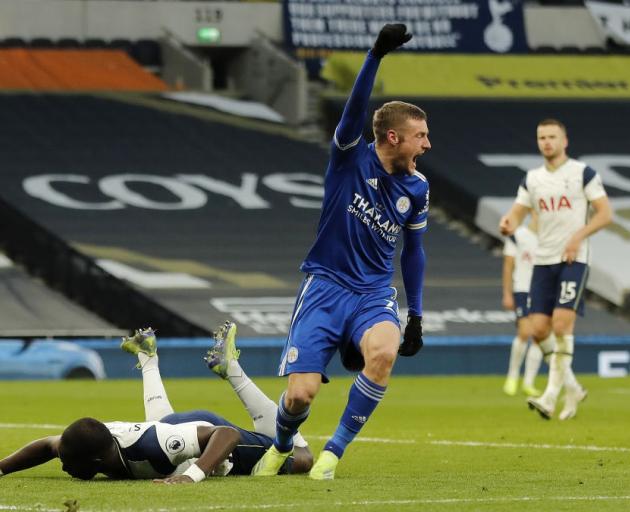 Jamie Vardy celebrates scoring for Leicester against Spurs this morning. Photo: Getty Images
Leicester City produced an impressive performance to secure a 2-0 win at Tottenham Hotspur in the Premier League this morning.

Striker Jamie Vardy scored the opening goal and had a hand in the other against a toothless home side.

Vardy netted a penalty on the stroke of halftime and his 59th-minute header led to Toby Alderweireld's own goal, lifting Leicester two places up to second on 27 points from 14 games, four behind champions Liverpool.

Tottenham dropped two places to fourth after a second successive defeat, having suffered a 2-1 loss at Liverpool last week.

The opening half produced few fireworks before it came to life in stoppage time as Leicester were awarded a penalty following a VAR check with Spurs manager Jose Mourinho already on his way to the tunnel.

The Portuguese turned around and watched in dismay as the replay showed Serge Aurier clattered into Wesley Fofana on the edge of the area before Vardy blasted the spot-kick down the middle past goalkeeper Hugo Lloris.

Tottenham were let off the hook by VAR shortly after the break as James Maddison had a superb finish ruled out for marginal offside, as he took James Justin's long ball in his stride before burying a shot past Lloris.

Vardy got on the end of Marc Albrighton's cross from the right and his header at the far post cannoned off Alderweireld into the back of the net.

Spurs pressed in the closing stages as Leicester keeper Kasper Schmeichel kept out Son Heung-min's close-range effort with a brilliant save before the visitors twice came close to adding a third goal.

Scott McTominay and Bruno Fernandes scored two each as Manchester United thumped Leeds United 6-2 at Old Trafford to move up to third in the Premier League.

McTominay scored twice in the opening three minutes, the first a stunning strike from distance, before Fernandes made it 3-0 in the 20th minute.

Victor Lindelof added a fourth before a Liam Cooper header, four minutes before the interval, gave Marcelo Bielsa's Leeds a glimmer of hope for the second half.

But McTominay set up Dan James for United's fifth before a Fernandes penalty made it 6-1.

Stuart Dallas gave Leeds some reward for their efforts with a beautiful curling shot from distance.

United are on 26 points, five behind leaders Liverpool and just a point behind second-placed Leicester.

Vardy said Leicester executed their game plan to perfection, adding that the Foxes needed to improve their home form after clinching a sixth away win in seven games.

"We've come here with a gameplan and we've absolutely nailed what we wanted to do," he told Sky Sports.

"It's set us on the way to get the three points that we think we deserved.

"It obviously shows we're doing something wrong in our home games. We need to get these performances going in week, week out and hopefully pick up some more wins."