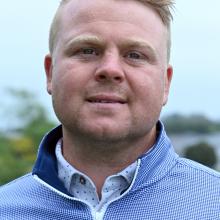 Ben Patston
It will be an all-Balmacewen affair when the Bombers and B52s face off in the Metropolitan senior A final in a fortnight at the Otago Golf Club.

Both sides had to fight hard to get the job done at Taieri Lakes in fine but chilly conditions on Saturday.

The Bombers scraped past Chisholm Links 3.5-2.5 although the scoreline perhaps flattered the Links side in the end.

At the halfway stage, the Bombers had their noses in front despite most matches still sitting in the balance.

Bombers No2 Ben Patston struck first, beating Phil Bungard after some mid-round controversy was rectified when Bungard picked up his ball from 60cm on the 11th green without the hole being conceded.

This led to a sporting concession on the 12th for square-up.

But Bungard’s wheels fell off almost immediately as Patston went on a run, winning the match 4 and 3.

Bombers No3 Brandon Hodgson then beat Mackenzie Gibson to give the Bombers two games and the advantage but it was not all plain sailing despite two team-mates holding advantage in their matches.

When the battle of the Jasons went the way of Links No5 Pegler over Hughes, attention turned the grudge match between the No6s, Tyrone Ratahi (Bombers) and Matt Tautari (Chisholm Links).

Ratahi held a 3-up advantage before Tautari stagged a comeback, again putting with his wedge to draw level on the 18th tee before a Ratahi birdie on the final green gave the Bombers three games.

Links No4 Mike Weastell kept Duncan Croudis in his sights. A birdie at 17 gave him a 1-up advantage which he capitalised on, winning 2-up to give Chisholm hopes of a playoff.

Meanwhile, Bombers No1 Callum Judkins was holing everything while scrambling throughout his match against the much-improved Mike Bowman.

However, with Judkins 1-up on the 18th tee and word filtering through the Bombers had three games, Judkins conceded the hole for a half to give the Bombers a ticket to the big dance.

On the other side of the course, the favoured St Clair outfit was struggling to shake a well prepared Otago B52s side missing strike player Tom Lee.

Saints No2 Callum White was first finished with an emphatic win over Howard Maxwell before Saints No3 Ryan Bellamy proved too strong for Andrew Hobbs with sub-par golf.

But things were not looking rosey for the young Saints side.

Henry Hodgson was subbed in late for B52s captain Steve Horn who fell ill and sprung a shock defeat on Jacob Bellamy who had found a home at No6.

That set the tone for the run home and it was all the B52s from there.

Veteran Paul Hubbard has clearly benefited from a year of Masters golf easily accounting for Parker Aluesi on the 16th green.

Saints No4 Tony Giles had his nose in front early against former Otago junior Ricky Stewart but it was Stewart who came home the stronger on his old home course for a popular win on the final green to give the B52s three games.

But it became a foregone conclusion when B52s No1 Matt Weir turned 1-up on Matt Crawford on the final tee, Weir winning the final green for a 2-up victory and a 4-2 result.