What promised to make the finals picture a little clearer possibly made it murkier after an enthralling weekend in the Metropolitan senior A pennant series on Saturday.

Two draws and an upset from bottom-placed Chisholm Links over the St Clair Devils have thrown a spanner in the works, particularly as the race to grab the fourth playoff spot heats up.

Despite the fifth-placed Bombers desperately seeking a win against the St Clair Saints, the drawn result can now be seen as a positive as they sit only one point behind the Devils with two rounds to play.

At Taieri Lakes, the 2v3 battle was shared. 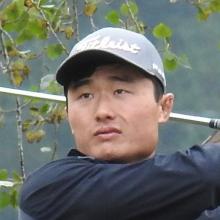 Tom Lee.
The match of the week between Matt Tautari (Taieri Lakes) and Tom Lee (Otago B52s) lived up to its billing, going down to the wire.

The home side began well with Jaxon Boyes and Hayden Robertson both recording wins at the tail before No 3 Matt Mercer secured a third win to ensure a loss was out of the question.

B52s No 4 Andrew Hobbs won the seasoned campaigners match over Mark Andrews to give the visitors their first win. He was soon joined by team-mate Will McLachlan, who impressively beat Ken Shaw.

That was looking like the last joy for the B52s, with Lakes No 1 Tautari in command despite battling a dodgy back against Lee.

But it all came unstuck for Tautari on Taieri’s tricky home stretch, with Lee’s short game proving the difference.

After winning the 16th with a birdie, Lee made up and down for pars on 17 and 18, while Tautari bogeyed the last two holes to hand Lee the win and a drawn result.

At St Clair, Chisholm Links inflicted a blow on the Devils with a 4-2 win.

It started well for the Links, with No 5 Mike Bowman overturning a four-hole deficit to beat Ryan Littlejohn on the 17th, while team-mate Blair Lifiton won on the last against Tom Griffin.

The top Devils duo of Phil Bungard and Logan Clarke responded with easy wins to level the fixture.

But the Links middle order sealed the match for the visitors with Matt Heaton and Jason Pegler both securing wins.

Despite only securing a draw, the Bombers will be happy to take any points after the Devils loss.

Saints club legend Tony Giles proved he is still at the top of his game, securing a much-needed victory over Duncan Croudis on the final green.

At the tail, Saints No 5 Parker Aluesi continued his fine form with an emphatic victory over Tyrone Ratahi, before Bombers No 6 Callum Judkins replied over Matt Crawford.

Bombers No 1 Luke Murdoch relished his role in the hot seat, shutting out Jacob Bellamy to give the visitors the edge.

The middle-order games were split, with Scott Mitchell (Saints) and Ben Patston (Bombers) earning wins, and the focus turned to the Giles/Croudis match.

■  Lydia Ko shot the joint-low round of the day yesterday to have a chance at claiming her second win of the LPGA season.

Ko jumped from 17th to a share of fifth following a third round 65 at the Meijer LPGA Classic in Michigan, The New Zealand Herald reported.

The world No 4 carded 7-under round to move to 13-under for the tournament, five shots behind leader Nelly Korda.