If someone had said it would take nine rounds before the defending champion Bombers cracked the top four of the Metropolitan senior A pennants, you would be forgiven for laughing off the idea.

But that has transpired, after a weekend of golf that continued to not quite go to script.

The Bombers proved far too strong for a St Clair Devils side that appears to have peaked on its run home, going down 5-1, and the B52s have a home semifinal locked up, after a narrow home win over the leading St Clair Saints.

But the biggest upset of the weekend happened out on the Taieri, where Chisholm Links refused to let Taieri Lakes extinguish its finals hopes, instead ending Taieri’s chances of hosting a semifinal.

The rejigged order did not quite pan out as the all-important Taieri tailenders managed only one win.

Lakes No5 Mark Andrews easily accounted for Blair Lifiton. However, that was offset by Links No 6 Sean Geary defeating Ken Shaw on the final green.

Links wrapped up the upset victory when No 2 Mike Weastell finished over the top of Ryan Rosevear on the 17th green, while Lakes No1 Matt Mercer added a consolation win in the 3.5-2.5 defeat.

The result means the Links remain in contention by the barest of margins but will have to beat the Bombers at home and hope the B52s beat or draw with the Devils. 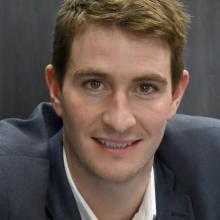 Duncan Croudis.
At Balmacewen, the Bombers now look in the box seat for the fourth semifinal position after a dominant 5-1 win over the St Clair Devils who now sit outside the four.

Bombers No 6 Duncan Croudis was well under the card in thrashing Kade Haley-Broderick 8/6.

The top order soon came to the party to seal an early victory with wins to Brandon Hodgson, Luke Murdoch and Ben Patston while Callum Judkins defeated Phil Bungard on the final green in what would be a match of interest for new Otago selector Andrew Hobbs.

Devils No5 Luke Worthington was his team’s only win.

Teeing off the back nine, it was the Saints who landed a couple early blows to lead the B52s but it was all in vain as the home side ultimately ran out the winner 3.5-2.5

B52s No5 Will Mclachlan came from behind to beat Matt Crawford on the 18th to get the home side on the board. He was soon joined by top-order players Andrew Hobbs and Tom Lee with wins to at least earn a draw.

But the battle of the No3s always looked set to be a close contest between the B52s’ Chris Snowand Saints’ Parker Aluesi.

With four holes to go Snow holed a 17m putt on the sixth for a half which kept him the match before both players drove the par-4 eighth, halving in birdies.

Both then narrowly missed birdie opportunities on the final hole to halve the match which gave the B52s the victory.