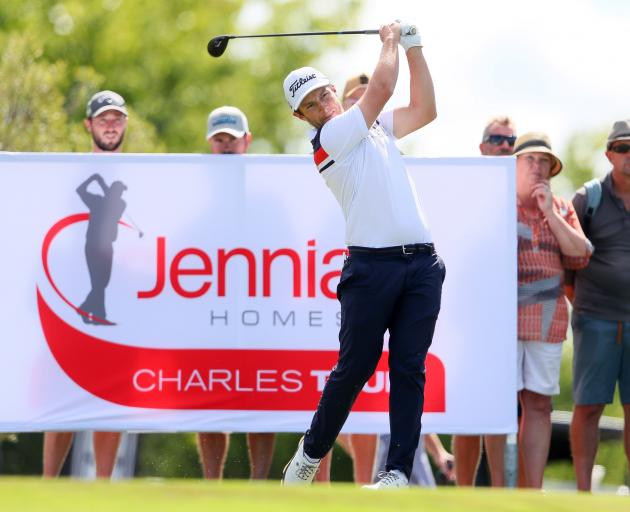 Ben Campbell in action at the Muriwai Open in April. PHOTO: BWMEDIA/SIMON WATTS
Queenstown professional Ben Campbell has seen his career stalled by major injuries. After recovering from hip surgery in 2019, he has set the goal of winning on a major tour in the next 12 months. Peter Thornton reports.

Ben Campbell remembers lying on his bed in his hotel room in Sydney in agony.

The 29-year-old had been struck by debilitating pain in his hip and his lower back.

He had battled through three rounds of the 2019 New South Wales Open, but could not take any more.

“It was just so painful,” Campbell recalled.

“That was the point where I knew I had to get it fixed. It was time to have the operation which I’d been fighting.”

Campbell, a former world No6 amateur and one of New Zealand’s most promising young players in many years, has had to endure a testing professional career which has been punctuated and stalled by major injuries.

“It was incredibly frustrating,” he said.

“Looking back, I probably should’ve got the operation done straight away, but I was playing well and I had a chance to get my European Tour card. I had just been out for a year and a-half and my mindset was, ‘I should be able to manage it’.”

Campbell has huge talent and potential, but he was considering walking away from professional golf.

“I definitely thought about quitting. I’d just had enough and wanted to walk away. After the last injury, I was just left scratching my head and pretty down about it.

“There have been tough times mentally through my injuries. In those times you have got to have good people around you to support and help you out to see what you are doing is worthwhile.”

That was almost two years ago, and the world is a much brighter place now.

In April, Campbell was back competing in his first professional tournament in 18 months since his hip operation.

His putter ran hot in round three and, when he made a birdie putt on the 12th to be 8-under for the day and the outright leader on 14-under he was on the cusp of a fairy-tale return.

Campbell shot a 1-over 73 in the final round and was overtaken by Fox, who carded 10-under 62 to break the course record and win by seven strokes.

“Even though I was frustrated with my final round, I knew that I had plenty to be proud of. That week reminded me what I am capable of.”

It also reminded him what he’d been missing.

“I love trying to perform under pressure. That is the challenge that gets me and keeps me coming back. There is nothing like that feeling of being in contention to win a golf tournament.”

Campbell’s eyes are set on much bigger things, but to win the Mondiale Omaha Pro-Am in May — his first win in more than three years — was a good first step.

He hopes his injuries are behind him.

Campbell remembers the moment when his back pain started in May 2018. He was warming up in the Bangladesh Open and he felt a pang in his left hip.

“I played that week and finished up but my back didn’t feel quite right,” he said.

He arrived home and had scans which revealed a tear in one of his discs in his spine.

Campbell had had trouble with his left hip. All the rotation had been lost and it was putting pressure on his back.

He was in two minds whether to go ahead with the operation or not. He decided on the latter and tried to play for the next eight months.

“But it was always there, and I just couldn’t get on top of it.”

He went on antibiotics for four months and after a month it began to improve.

ACC supported Campbell in dealing with his chest injury and more recently his back and hip pain. It provided MRI scans, assessments and physio and chiropractor appointments to manage his pain and keep him playing.

In December 2019, he decided to get it sorted and paid for the operation privately. He accepted that meant another 12 months of rehabilitation.

“I had just got back to playing some really good golf and I felt like I was playing well enough to win on any tour in the world,” Campbell said.

He led the Fiji Open (co-sanctioned on the European Tour) before finishing in a tie for third and he finished tied for fifth in the ISPS Handa Super 6s in Perth. Before that, he had finished runner-up in the 2017 New Zealand Open in Arrowtown.

“That was the most frustrating thing. I did all of that work after the chest operation. It had been a really big six months to get back to that level so that was pretty disappointing.”

But Campbell committed to his rehab and built on his strength and conditioning so he could compete again.

The 2018 NZ PGA Champion, who still has status on the Asian Tour and Australasian Tour, feels like he is ready to make up for lost time.

“Winning at least one event on a major world tour is the goal for the next 12 months,” he said.

“The main goal right now is getting my game back to a place where I feel I can win on any tour in the world. I am confident I can do that.”

Campbell is treating the winter months as an off-season. He wants to put the hard work in so come September, when things have hopefully settled down Covid-wise, he is ready to fire.

“I’ve always said I’ll retire when I’ve lost that motivation to compete. When there is a morning when I can’t be bothered getting out of bed to train and it feels like a chore then I’ll know it‘s time to hang up the boots.