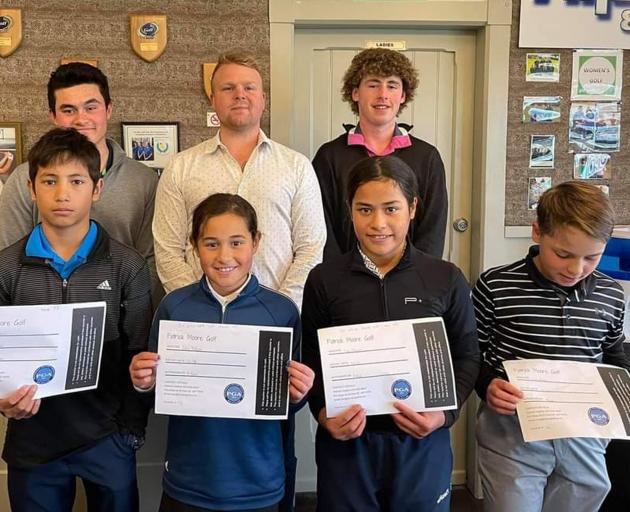 Sponsor Ben Patston (back row centre) with leading performers in the Otago junior golf series (back, from left) Parker Aluesi, Lewis Harper; (front) Kairangi Koni, Maia Koni, Anahera Koni and Josh Harris. PHOTO: SUPPLIED
Ben Patston is enjoying a chance to give back to the game.

The Otago representative has lent his name and sponsorship to the new Patston Media Junior Golf Series, which had its first two events last week.

He said he came on board to help bolster the Dunedin Junior Golf Club.

"I really just love supporting junior golf in the region and see huge potential to grow the game over the next three to 10 years," Patston said.

"Otago is in an OK position, but tournaments like this being held will help grow numbers and give these kids a great chance to play under pressure, which will increase their skill level.

"I also have two young lads, 8 and 10, who enjoy playing golf, so I’m hoping they can become a part of this setup."

On Thursday, the St Clair Junior Open under-19 division was won by Parker Aluesi (St Clair) with an excellent par 71, by one shot from William McLaughlan (DJC) and George Prendergast (Te Anau).

The Friday event was supposed to be played at Otago but the course was closed as it was too damp.

It was moved to Chisholm Park, where Prendergast followed up his good round at St Clair by blitzing the field overall, playing in the under-16 section, with a brilliant 4-under-par 68. Nearest to him were under-19 players McLaughlan and Aluesi with 72.

Prendergast was the under-16 winner while McLaughlan edged Aluesi in the under-19s.

The players are now looking forward to the following tournaments later in the year.