Record-tying win for Woods in Japan 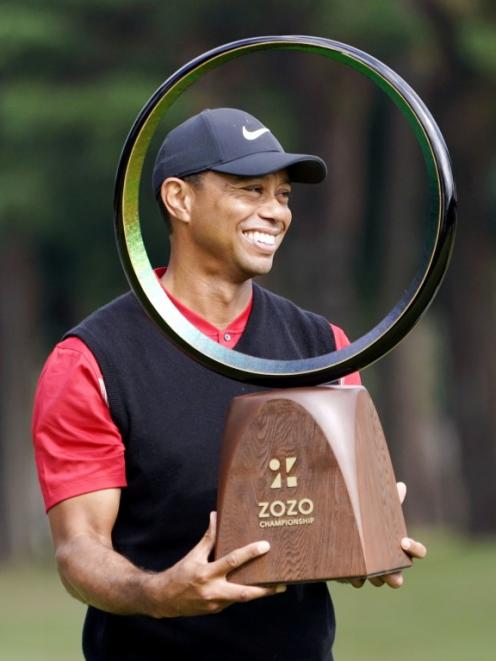 It was not exactly smooth sailing for Woods, but in the end his closing three-under-par 67 was enough to hold off a challenge from Hideki Matsuyama at Narashino Country Club in the first PGA Tour event played in Japan.

Woods, who had to play seven holes on Monday in the weather-affected event, finished at 19-under 261 in his first tournament since undergoing arthroscopic left knee surgery two months ago.

Snead was 52 years old when he recorded his final tour victory in Greensboro, North Carolina in 1965 - nine years older than Woods' current age.

"This was big," Woods said in a greenside interview.

"It's just crazy. It's a lot (of victories). I've been able to be consistent most of my career and put myself up there with a chance to win on a number of occasions. It's been a long week, five days at the top of the board is a long time. It was definitely stressful."

The win was a key milestone for the 43-year-old Woods, who has won three times since returning to competition nearly two years ago following a 2017 spinal fusion that fixed searing back and leg pain and resurrected a career that appeared destined to end prematurely.

His first PGA Tour victory came in Las Vegas in 1996, the same year he turned professional, and his list of 82 wins includes 15 major championships, the most recent at the Masters at Augusta National in April.

Woods resumed at 7.30am on Monday (local time) with a three-shot advantage over Matsuyama, and took a while to find his stride, making a bogey right off the bat after dumping his approach shot into a bunker at the par-four 12th.

But the par-five 14th proved decisive. After Matsuyama, playing in the group ahead, lipped out a five-foot birdie chance, Woods made no mistake with a birdie chance of his own, walking in a 12-foot putt, striding towards the hole as his ball toppled in and the small gallery roared.