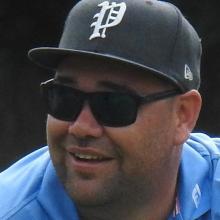 Matt Tautari
As the metropolitan Senior A series nears the playoffs, four sides are looming as semifinalists.

Taieri Lakes jumped into third after beating St Clair on Saturday, while the Bombers and Island Park both recorded wins.

Ken Shaw had a resounding win, while a come-from-behind win for No2 Mark Andrews locked up three games for Taieri.

St Clair No1 Joseph Hancock’s 6/5 win over Hayden Robertson meant the focus then turned to the match between Matt Mercer and Parker Aluesi.

Mercer stiffed his tee shot on the par-3 17th to win the hole — squaring the match. With a possible draw on the cards, Aluesi’s 1m putt for par missed on the final green, giving the home side a much needed win. 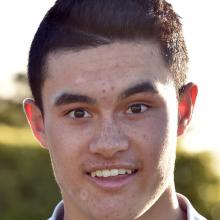 Parker Aluesi
Island Park put out its strongest line-up of the season and proved too good for the Chisholm Links players, who were greeted with some tricky pin placements around the short layout.

A switch to the tail for Park players Michael Smith and Chris Snow ensured wins and early momentum, while Park No3 Michael Minty and No2 Matt Tautari iced the result. Links No4 Matt Heaton defeated Park veteran Mike Wray on the final green and No1 Jason Pegler won the last hole to halve with Phil Bungard.

At Balmacewen, the series-leading Bombers proved far too strong in the derby match with a 6-0 win over the B52s, who have recorded back-to-back whitewashes.

The final catch-up game between Chisholm Links and Taieri Lakes was played in icy conditions on Sunday morning out on the Links. The home team had a comfortable 4-2 win over Taieri.