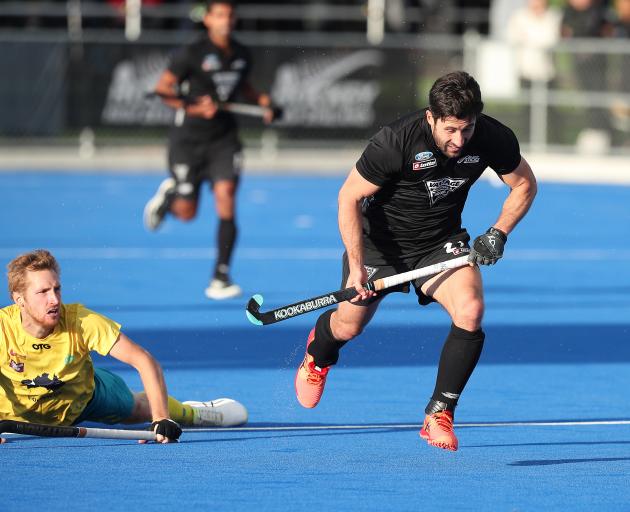 Daniel Beale of Australia challenges Kane Russell of New Zealand during the Trans-Tasman Series Hockey Match between New Zealand and Australia. Photo: Getty Images
It was daytime hockey for the first time in the transtasman series in Palmerston North yesterday, but the home sides are still without a win.

In the first-up women’s clash, a much improved effort from the Black Sticks in the second half gave the crowd hope of a home side victory after two earlier draws but it was not to be, as a late Australian goal left the final score at 2-2.

The Kookaburras won 4-2 to collect their third win of the series in probably their best performance.

“They dominated possession and we fed off scraps. We managed to get a couple of goals to put us back in the match but we let them score goals off our mistakes.”

The Kookaburras got off to a flyer of a start with two goals in the first eight minutes.

While Australia was down to nine players, Kane Russell clawed one back for the home side with a perfectly positioned penalty corner drag flick into the bottom left corner. But within a minute Australia had restored its two-goal lead, when Blake Govers converted a penalty stroke won by Lachlan Sharp.

And just before the half-time break, Oliver MacIntyre scored his first goal for his country with a cracking drag flick to leave the halftime score at 3-2 to the Kookaburras.

A nice Nathan Ephraums touch gave the Kookaburras a 4-2 lead in a dominant third quarter, and it retained that lead until the final whistle.

In the women’s series, tomorrow night’s final test will be a winner-takes-all affair after another draw.

The Hockeyroos took an early lead when Maddy Fitzpatrick fired a penalty corner into the top right corner.

Midway through the second quarter, Julia King equalised for the home side with a reverse shot from the top of the circle after a lovely through pass from captain Stacey Michelsen.

The biggest cheer of the day came in the third quarter when experienced defender Ella Gunson latched on to a rebound from an Olivia Merry penalty corner strike to give the home side a 2-1 lead.

The fourth and final matches in the series are tomorrow.