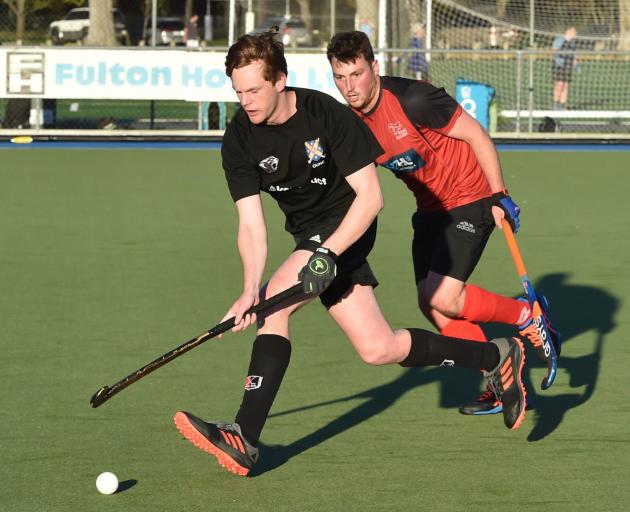 University Black Panthers’ Sam Taylor (left) looks to control the ball as Albany Alligators player Sam Yung comes in to challenge in a game at the McMillan Centre yesterday. PHOTO: GREGOR RICHARDSON
It was a match between top and bottom of the Challenge Shield table in the premier women’s grade when holders City Highlanders took on the University Stingrays on Saturday.

A goal after less than 10 seconds by City set the warning bells going early for the Stingrays.

Despite conceding of the goal, the Stingrays acquitted themselves well for the rest of the first quarter, creating some positive play but without getting the desired result.

With a little more than a minute remaining the Highlanders scored a penalty corner.

The Stingrays, with a shot that sailed past the goal and enjoying better territory, meant City had to work defensively but the team looked composed.

Another penalty corner brought a slick goal for the Highlanders taking the lead to 3-0.

City was doing things easy against a Stingrays outfit that could not maintain enough pressure and composure to make use of the ball it had.

The third quarter was an end to end affair with plenty of ball movement but the score remained the same heading into the final quarter with the result looking assured for the Highlanders.

City started the final quarter with an intense period of offensive pressure but the defence of the Stingrays held strong.

Finally, City got its fourth with a screamer in the top right hand corner and followed up with another in the latter stages of the quarter.

Final score was 5-0 to City and the Challenge Shield remains with the Highlanders for another week.

There were doubles for Bayley Anderson and Jordan Cunningham and a goal for Morgan Forrester.

The other women’s fixtures were Kings against competition leaders, the University Huskies. Kings took the win in the penalty shoot-out after being 3-all at regulation time.

Taieri and Momona A completed the action, Momona winning 4-1. There was a double for Bex Clemenston and goals for Nicole Strawbridge and Laura Kotkamp. Sophie Gray scored the solitary goal for the Tigers.

Saturday’s games featured the Panthers again up against Albany and the fortunes did not improve for the students as the Alligators won 8-1. Albany’s goal scorers included two each for Thomas French and Nick Parata and other goals to Opeti Tuimana, Hugh Jenkins, James Thompson and Sam Young. Jack Pryde managed to score for the Panthers.

Kings United played the University Blue Whales and was victorious 4-1 as Connor Hoskin scored two and William McNaughtan and Zach Mason one each. Henry Will was the goal scorer for the Blue Whales.