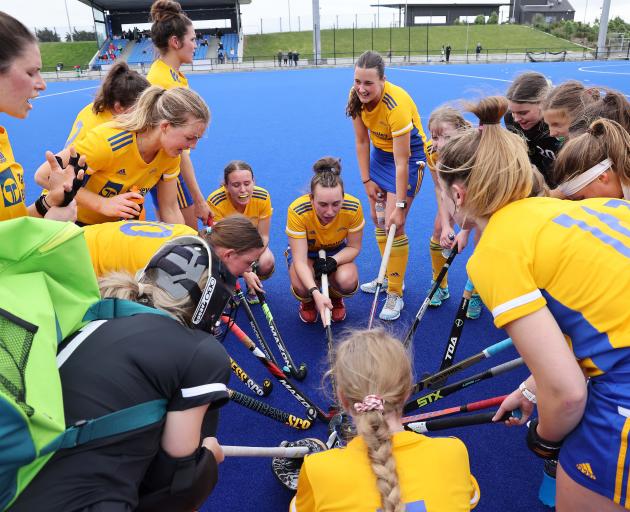 The men had a win, a draw and a loss at the Otautahi Cup, and the women had one win — a thriller — and two losses.

Rebecca Baker scored the women’s goal in a 2-1 loss to Wellington yesterday morning, while Baker, Olivia Allan and Amy Robinson were on the scoresheet in a 5-3 loss to the Canterbury Cats.

"Our women lost 9-0 the last time they played Canterbury, so that shows how far they’ve come," Gill said.

"The team learned a lot, and their results show how much they improved."

Gill was delighted with the input of guest players Baker, Robinson and Anna Crowley, and said Otago stalwarts Tessa Jopp and Ginny Wilson were also impressive.

Craig Turner scored the Otago men’s goal in a 3-1 loss to Wellington yesterday morning, and Finn Ward scored in a 1-1 draw with the Canterbury Cavs in the afternoon round.

"We were a little disappointed with that performance against Wellington, but we regrouped really well against Canterbury and could have won that.

On Saturday, the Otago teams had contrasting wins.

It was mostly one-way traffic for the men, who thumped the Canterbury Beavers 5-0.

After a scoreless opening quarter, Jordan Ward gave Otago the lead from a penalty stroke.

James Nicolson then produced an extraordinary piece of hustle and skill. He tracked back to win the ball, tore down the flank, went to cross and saw his effort bobble over the keeper and into the goal.

Otago led 2-0 at halftime and pushed further ahead when Ward scored his second, from a penalty corner.

The Beavers pulled one back to make it 3-1 before Nicolson grabbed his second, just 45sec into the final quarter, and Turner blasted into an empty net with five minutes on the clock.

The Otago women beat the Canterbury Barracudas in an epic shootout after their clash had ended 2-2.

It was a tight first half until Otago scored a goal that was completely against the run of play. Canterbury had a penalty corner but it was missed by the trapper, and after Otago swept downfield with two long passes, Sarah Thomas fired in the opener.

Baker made it 2-0 in the third quarter when she squeezed a shot past the Canterbury goalie at the near post.

The Barracudas pulled one back almost immediately, but Otago led 2-1 until the final minute when Anoushka Chiswell scored from a reverse-shot blast to send it to penalties.

The shootout was all about the goalies, and Otago keeper Wilson produced some magnificent saves.

Robinson and Brooke Eddie scored for Otago, before it went to sudden death. No fewer than nine players then failed to score, before Tegan Buchanan grabbed the winner for Otago.

That marked the end of a drawn-out, Covid-affected season.

Hopefully, the Otago teams will next be seen on home turf when Dunedin hosts the national championships next year.

"It’s exciting. It’s been a long time since we hosted that tournament, so it’s going to be fun," Gill said.