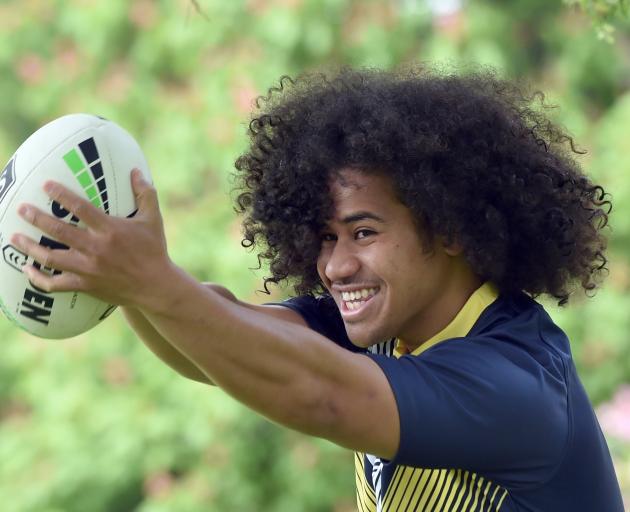 Otago Whalers hooker Tonga Nau passes a ball at the Gardens ground earlier this week. PHOTO: PETER MCINTOSH
Switching between codes has not been a problem for Tonga Nau.

The 20-year-old has been one of the stars for the Otago Whalers in their South Island rugby league premiership campaign.

He shone at hooker during the team’s upset win over the Canterbury Bulls in Christchurch two weeks ago.

Nau showed his danger in sniping from dummy half and scored two tries as the Whalers completed the historic result.

It was certainly not the form to expect from someone who spent the winter turning out for Kaikorai in the colts and premier rugby union grades.

The transition is one Nau is used to, though.

He grew up playing league, and picked up union at Western Springs High School in Auckland.

While there, he played both codes.

He switched to Mount Albert Grammar in year 13, where he had to choose one sport, and played for the school’s First XV in the Auckland 1A competition.

Since arriving in Dunedin to study for his sociology degree last year, he has been able to play both.

Nau has enjoyed that, and while the games were different, he had found benefits from playing union in helping his league game.

"I’ve found learning how to pass both ways really helpful," he said.

"I still don’t like the running around the field, though. Too much running.

"I enjoy playing both."

He had found the Whalers set-up good, too, both in the off-field staff and the players on the team.

The game was a different one in Dunedin from Auckland, though.

"It’s a lot faster down here.

"I think in Auckland, it’s just like the boys are big, pretty big. Coming down here, the game’s a lot faster. The boys are a lot hardier down here, just straight running."

That North Island experience may prove valuable on Sunday.

The Whalers are scheduled to play the Wellington Orca in Christchurch, pending Covid-19 alert levels, in the playoff between the second-placed South Island and North Island teams.

They missed the top-placed playoff against Upper Central, despite the win over Canterbury.

A loss to Southland left them tied with the Bulls, but with a worse points differential.

Nau said the Whalers had played well against Canterbury, although felt they could still lift.

"I feel like the boys played well but we can step it up a little bit more. That extra step just to finish the job. I guess we’re just going to step it up and play."