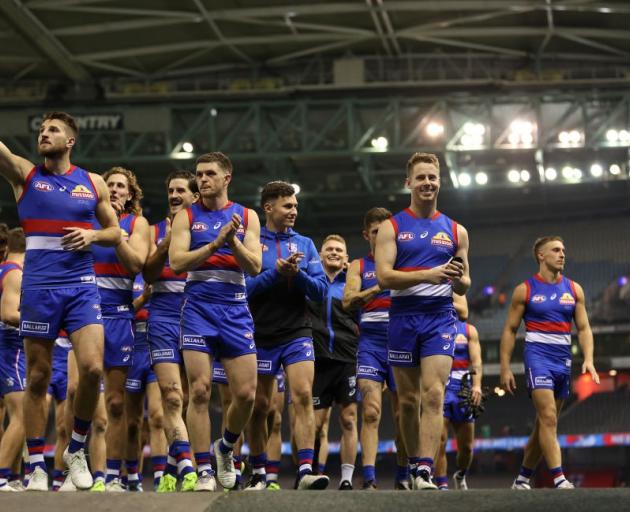 AFL's Western Bulldogs are isolating until they return negative Covid-19 tests, the team said, after one of the club's staff went to a shopping centre deemed an exposure site by authorities. Photo: Getty Images
An outbreak of COVID-19 in Melbourne has sent a chill through Australia's sports leagues, with an entire Australian Rules football club forced into isolation and two basketball teams relocating to a northern state.

Players and staff at Australian Football League side Western Bulldogs were isolating until they return negative Covid-19 tests, the team said, after one of the club's staff went to a shopping centre deemed an exposure site by authorities.

"It is expected that players and staff will be able to return to training on Wednesday, pending the negative test results being received overnight," the team said in a statement.

United will remain in Queensland capital Brisbane until their game against Sydney Kings on Saturday, while Phoenix travelled to the state's northern city of Cairns on Tuesday.

"We have faced a number of challenges this season and the current situation in Victoria is just another that we need to navigate," NBL Commissioner Jeremy Loeliger said in a statement.

"We thank both Melbourne United and the South East Melbourne Phoenix ...and hope we can get them home as soon as possible."

The outbreak ends Victoria's run of zero cases for nearly three months and prompted New Zealand to suspend quarantine-free travel with the state for 72 hours from Tuesday evening, while the neighbouring state of South Australia has imposed travel restrictions.

If extended, New Zealand's travel suspension could also affect the Super Rugby Trans-Tasman competition, with the Rebels to travel to Queenstown to play the Highlanders on Sunday.

Victoria authorities have made face masks mandatory at indoor venues and restricted home gatherings but have so far held off banning spectators at sports events.

Victoria was the hardest-hit state during a second Covid-19 wave late last year, accounting for about 70% of total cases and 90% of deaths in Australia. It contained the outbreak with one of the world's longest and strictest lockdowns.