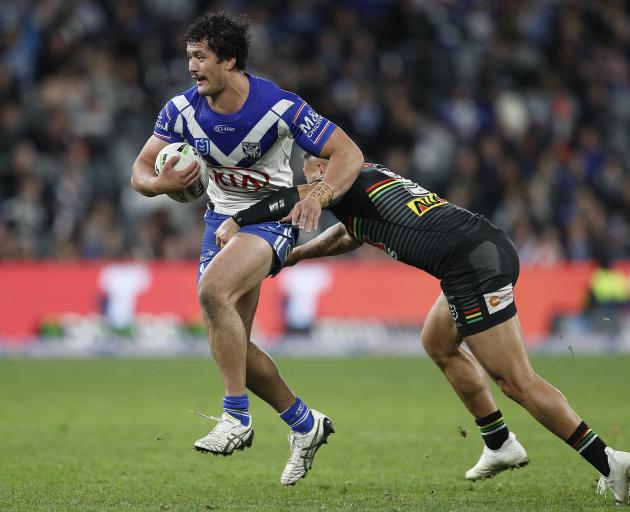 Corey Harawira-Naera (left) has been given a second-chance to make his debut after suffering an injury after his previous call-up. Photo: Getty Images
Braden Hamlin-Uele, Corey Harawira-Naera, Charnze Nicoll-Klokstad and Zane Tetevano are in line to make their debuts for the Kiwis against the Kangaroos and the Lions.

The four players were all last night named in a squad which also features returns for wingers Jordan Rapana and Jamayne Isaako and back rowers Kevin Proctor and Joseph Tapine who were not involved in the June test victory over Tonga in Auckland.

Tokoroa product Tetevano has a second opportunity to play his first test after being in the squad but not being used in the Kiwis' 34-14 win over Tonga in June.

A premiership winner with the Sydney Roosters last year, the 28-year-old was a regular again throughout this season but, after being named for the grand final against Canberra, he was ultimately omitted.

Northland-raised Canterbury-Bankstown second rower Harawira-Naera has also earned a second chance of making his test debut. He was originally selected in last year's squad for the home test against Australia and the following three-match series in England only to be ruled out with injury.

After previously representing the Cook Islands at test level, Nicoll-Klokstad comes into the Kiwi squad for the first time after a superb season for beaten grand finalist the Canberra Raiders. He scored 11 tries in 25 appearances.

Glenora Bears junior and former Junior Kiwi Hamlin-Uele earns selection after impressing in 21 interchange appearances for the Sharks this year.

Harawira-Naera, Hamlin-Uele and Tetevano are also in the Kiwis' World Cup Nines squad, Tetevano coming into both sides yesterday after James Fisher-Harris was forced to withdraw with injury.

Of the 19 players in the squad for the Tonga test in June, 15 return for the internationals against the Kangaroos and the Lions.

Four of the playing 17 are unavailable due to injury: captain Dallin Watene-Zelezniak, prop Jesse Bromwich, centre Esan Marsters and back rower Fisher-Harris.

Three players from the premiership-winning Roosters side are named - centre Joseph Manu, back rower Isaac Liu and prop Jared Waerea-Hargreaves - along with Tetevano while the beaten Raiders provide Nicoll-Klokstad, Rapana and Tapine.

In all, 11 players in the test squad are also in the Kiwis' World Cup Nines side.

The Nines players assemble in Sydney on Monday and the test squad on Sunday week.