Kiwis refuse to be intimidated 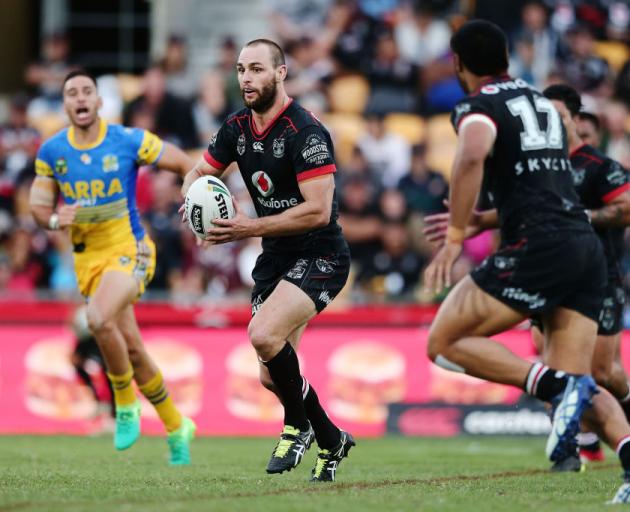 Simon Mannering runs the ball up for the Warriors against the Eels in an NRL match in Auckland last month. Photo Getty
Veteran Simon Mannering admits New Zealand have been overawed by Mal Meninga and his all-conquering Australian team.

Friday's test between the Kiwis and Kangaroos is shaping as a battle of wills and minds, something 41-test stalwart Mannering says the New Zealanders have struggled to get right.

The Kangaroos are hot favourites for the transTasman clash in Canberra as well as the end-of-season World Cup, but some of aura has been taken away from the side in recent time.

Paul Gallen and Corey Paker are retired, Greg Inglis and Matt Scott are missing due to injury and Johnathan Thurston is racing the clock to overcome a calf iproblem.

Lock and Dally M co-winner Jason Taumalolo is arguably the best player in the game - having averaged more than 200m for North Queensland this year.

All of this has served to feed into the belief of the Kiwis side as they attempt to win just their third mid-season trans-Tasman test since 1997.

"You just look at the results. When you've had a number of results go against you, it's hard not to have that doubt there," Mannering said.

"That's definitely a thing of the past. You put it to one side.

"But it's one things having that strong team on paper. You've got to have that belief and take it on the field."

The Kiwis were buoyed by three straight wins over Australia in the 2014 Four Nation and 2015 trans-Tasman test but haven't beaten the Kangaroos in their four attempts since.

For the Kiwis, Mannering's Warriors teammates Foran, Johnson, Luke and Tuivasa-Sheck shape as key having honed their combination over the past five rounds.

For years the Kiwis have always performed better during long tournaments, getting better as they get time together under their belts while in one-off matches have seemed to lack the same cohesion.

But Kidwell's side is growing in its consistency and will only improve if they're able to field the same side more regularly.

"It always helped when you do have regular faces in the side," Mannering said.

"We've probably had that for the last few years now. We saw that in 2015 when we had a pretty consistent team and managed to get a result against a tough Australian team.

"Everyone is pretty familiar with each other and we have some combinations there with the nine, six, seven and one all being at the same club (the Warriors) but at the end of the day it's not going to get us the win."