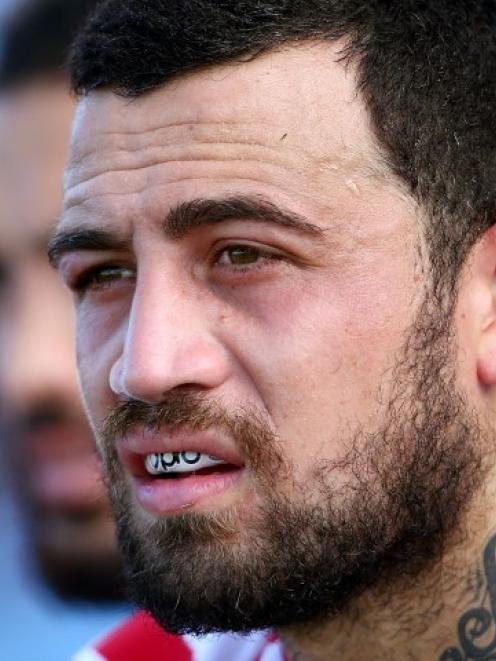 Ben Matulino. Photo Getty
It's not often you hear a 1.93m, 107kg front-rower admit to being scared, but that's how Ben Matulino is feeling ahead of this weekend's NRL Auckland Nines.

The Warriors prop is not quite shaking in his boots before the two-day tournament at Eden Park, but he concedes the shortened version of the game has him on edge.

With four fewer defenders in the line and so much room for attacking teams to utilise, Matulino has genuine fears he might be exposed by some of the NRL's smaller and quicker men.

"If I do get picked I'll be scared and nervous at the same time," Matulino said of his looming Nines debut. "Obviously there's a lot of fast players and when you see a little fast player that's probably a prop's worst nightmare.

"I'm pretty excited but obviously the team hasn't been finalised so I'm not celebrating yet."

The 26-year-old neglects to mention that his hulking presence and immense ball-playing skills will have rival defenders equally concerned.

He wreaked havoc out on the Warriors' left edge during an experimental stint in the back-row last season, scoring the first try in three consecutive games against the Raiders, Bulldogs and Titans, and offloading to create plenty more for his support runners.

Despite enjoying the change in position, and his undoubted ability on the fringes of the ruck, Matulino expects to be used more at prop this year. "I haven't practised at second-row at all over the preseason and I think Cappy [coach Andrew McFadden] will keep me in the middle.

"We've got Simon [Mannering] and Ryan Hoffman there [in the second-row] and they're both international players and can both play 80 minutes so that's good."

Matulino hopes the shift back to his more traditional role will see a return to his best form, after he battled through the back end of last season following an operation in June on his right knee.

The 19-test New Zealand international missed selection for the Kiwis' successful Four Nations campaign but has set himself some simple goals for the year ahead.

"Firstly I just want to play well for my club," he explained. "Pretty much that and not getting injured."

There's plenty to look forward to, he says, with the Warriors' Kiwis contingent still riding high and members of last year's NYC championship winning side pressing for first grade selection.

"Yeah, especially with Simon coming back after winning the Four Nations -- and we've got the younger boys that won the NYC pushing us. That's pretty good.

"It's just an exciting year."