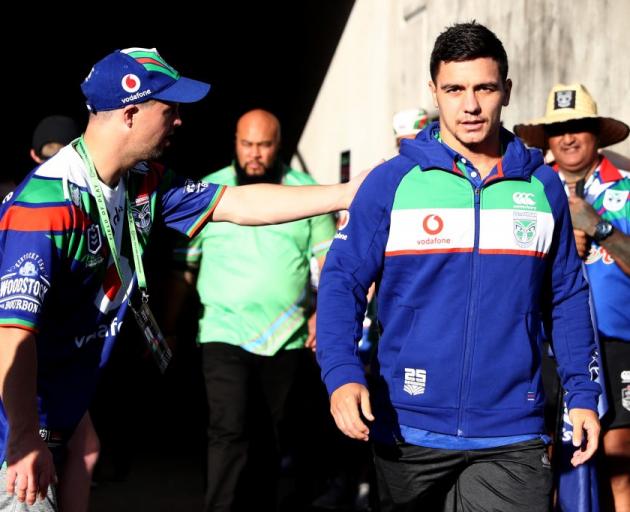 Kodi Nikorima in his new Warriors colours ahead of this weekend's game. Photo: Getty Images
Kodi Nikorima will make his Warriors debut at his old home ground.

Meanwhile Kiwis hooker Issac Luke has been relegated out of the 17 to face the Dragons on Saturday.

They are the major talking points ahead of the Warriors trip to Brisbane for the NRL Magic Round, where they hope to halt a four match losing run.

Nikorima's inclusion at five eighth means he will become Warriors #236, just eight days after signing for the club.

It will be a strange feeling for the 25-year-old — running out at Suncorp Stadium, where he played almost 50 matches for the Broncos — and it's also a swift transition for the play maker, but his combinations forged with many Warriors on Kiwis duty over the last few years will help.

Luke's demotion is intriguing, with Nathaniel Roache named to start and Karl Lawton in the reserves. Luke was always going to face competition from Roache this season, while Lawton perhaps offers better utility value as backline cover on the bench.

Luke has had a difficult campaign, affected by injuries and a concussion and has only averaged 47 minutes across his six appearances. This week's selection appears to be form-related, with no indication of an injury.

"When we look at our performances prior to the weekend they have been pretty close ones and it is just a matter of changing the energy and dynamic of the group where I think it is going to suit us this week," Warriors coach Stephen Kearney told Radio Sport. "That's what I think is best for the team this week and that's why I've run with it."

Wing David Fusitu'a has again been named, as he continues his comeback from a rib injury sustained in round six. He's missed the last two games but Kearney is confident he will take the field in Brisbane.

"We want to get him every opportunity," said Kearney. "He's got better and better, he's running at top speed now and they've done a bit of contact. We will see how he pulls up but I anticipate he is going to be okay."

Without first choice goal kicker Chanel Harris-Tavita, and back up kicker Luke, Kearney said that Patrick Herbert is the nominated man from the tee, with Tohu Harris also an option.

Utility Jazz Tevaga and prop Bunty Afoa are in line to return from leg injuries, while middle forward Ligi Sao could make his second appearance of the season, after being named in the 17.

Harris-Tavita is on the extended bench with utility Gerard Beale, prop Chris Satae and Luke.