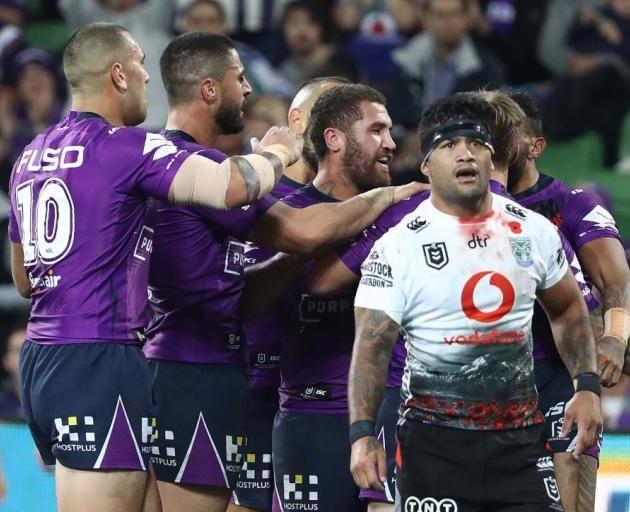 With just under five minutes left and the Warriors leading 12-10, Storm prop Jesse Bromwich made a mess of a quick play-the-ball and seemed to drop the ball. However, the Warriors defenders were ruled to have held Bromwich down for too long, with the Storm receiving a penalty 20m out in front of the goals.

After the scores were level, Brodie Croft then kicked a stunning field goal from 40m out, bouncing it in off the post, to give the Storm a 13-12 victory.

NRL head of football Graham Annesley today acknowledged that Cecchin should have called a knock-on, and given the Warriors a scrum feed.

"The real decision is did he try to play the ball before the defenders had a time to release or were the defenders interfering in the play-the-ball by holding on too long?" Annesley said.

"It's a very difficult decision. We ultimately thought a scrum would have been a better outcome."

The decision caused plenty of controversy, with several NRL commentators siding with the Warriors. Channel 9 commentator Paul Vautin said it was "dicey", while Johnathan Thurston said there was "no way" it was penalty.

"We've seen those go all year and the last couple of years. The referees are allowing that in the game, the boys holding on and slowing the play the ball down. He's got to play it correctly."

Warriors coach Stephen Kearney was disappointed by the decision when asked about it post-match.

"Don't get me started," said Kearney. "A 4-1 [penalty count] in the second half and there was one for an offside. You're asking me the question so you obviously saw something and I'm sure a number of other people in the stadium were thinking the same thing…it's disappointing."

"It can be cruel sometimes the game in that you don't get the reward for the amount of effort you put in," said Kearney. "In the last couple of weeks where we let ourselves down was we beat ourselves, and I thought we didn't do that."

Annesley said he understood why there was anger about the decision, but refused to demote Cecchin for the error.

"In the context of the game, I can understand why there is a degree of controversy around the penalty.

"You can't hang the referees on that outcome when you look at what they're confronted with."