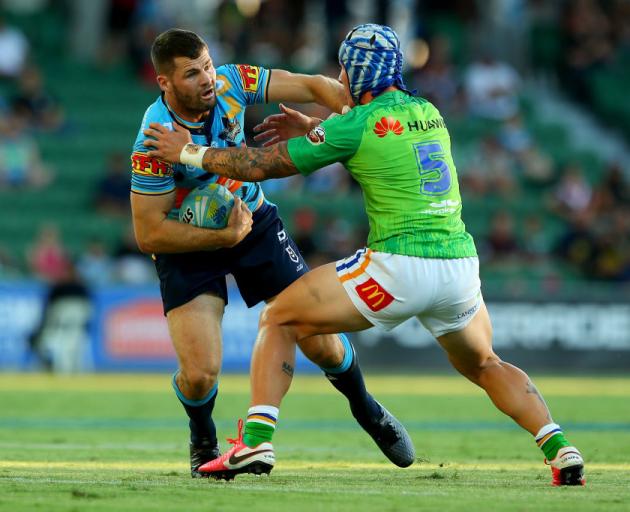 Anthony Don of the Titans fends off the tackle from Daine Spencer of the Raiders earlier this season prior to lockdown. Photo: Getty Images
ACT leader Andrew Barr has warned Canberra's ability to train or play NRL in the capital appears a long way off after the federal sports minister had labelled the game's planned return as "ambitious".

Barr on Monday continued the mixed messaging from governments, saying other states' leads would likely be followed in the ACT but he believed health advice said the NRL should not return soon.

It came as federal sports minister Richard Colbeck urged all Australian sports to exercise caution in planning their resumption from coronavirus.

But there was at least some good news for the league ahead of their planned May 28 comeback.

NSW Police Commissioner Mick Fuller reasserted his position that the NRL could play again in the state if it cleared some health hurdles, as outlined a in a letter last week to league bosses.

The state's health minister Brad Hazzard also backed the NRL to work through any workplace safety issues with games behind closed doors.

"As health minister, I have to remind everyone that there are work health and safety issues, and health issues," he said.

"I'm sure the NRL - a very mature organisation - will work through these issues in due course."

The NRL will meet broadcasters on Tuesday to discuss the structure of its season once it does resume.

But the logistics of the initial weeks are taking shape.

Queensland teams will have to be based in NSW, after Premier Annastacia Palaszczuk on Monday reaffirmed her stance against any exemption for the game.

A day after saying the three Queensland teams would not be able to cross back and forth across the border, the premier said there was no health advice saying the NRL could return.

Canberra might also have to train and play solely in NSW, depending on the ACT Government's stance.

Chief minister Barr on Monday said the Raiders would be able to train and play there if the game was deemed safe to return, but said that looked a long way off.

"If the health advice was that rugby league could take place in NSW, Queensland and other parts of the country, then presumably that same health advice would apply here," he said.

"But as the chief health officer from the nation observed yesterday, we are a long way from that.

"I don't blame the football codes for wanting to talk up a restart, but we are a long way from that at this point in time."

There are no border restrictions around leaving and returning to the ACT and the club have previously been based out of Queanbeyan.

Melbourne are also preparing to be based in NSW on restart, with the Victorian Government yet to say if the Storm would be able to train in the southern state.

The Warriors would also have to be based in NSW and, while due to arrive in the next week, they were still awaiting an exemption to travel.

Sports minister Colbeck said leagues should heed Chief Medical Officer Brendan Murphy's advice from Sunday that it was "premature" for the NRL to be planning a comeback.

"I think it's a bit ambitious, to be frank," Colbeck told ABC radio on Monday.

"If you consider the advice that we are still getting from people like Brendan Murphy ... they're the people who I think should be providing advice on these things.

"I think we need to be really cautious about the circumstances we are in."

The NRL is confident the drop in the rate of new cases will ensure a safer environment on return in more than six weeks, as well as their own strict biosecurity measures.