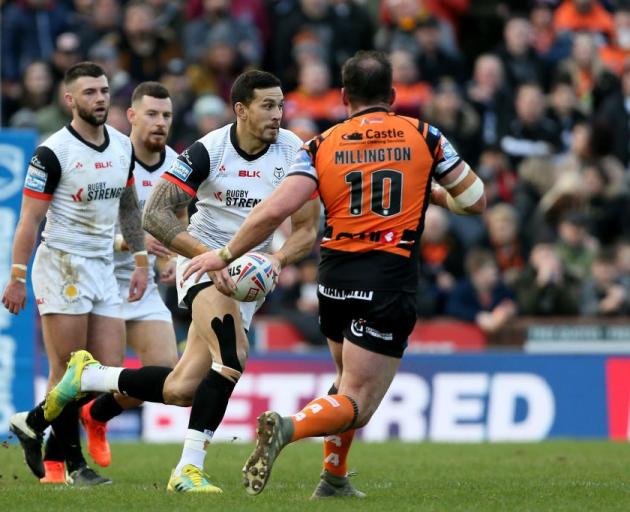 It was the former All Black's first rugby league game in six years after striking a multi-million dollar deal with the Toronto Wolfpack late last year.

The Wolfpack were already down 10-4 by the time Williams was introduced off the bench only to fall further to a 28-10 defeat to the Castleford Tigers.

Although there were glimpses of the SBW of old, the 34-year-old looked rusty and ultimately failed to live up to the hype.

Fans have since expressed their disappointment of the code-hopping star on social media.

"Have Toronto still got the receipt for SBW?" one asked while another wrote that Williams "looks like he's never played the game before".

"If it wasn't for sky mentioning him every 5 minutes I wouldn't of known SBW was playing, non existent," posted another.

Meanwhile, Williams was open with his disappointment but was positive for what the future of the season held.

"It was disappointing from a team point of view but from a personal it was great to get back out there," he told the BBC.

"It's an awesome atmosphere and for myself, the coach only wanted me to play 20-30 minutes maximum so I felt like I was getting a feel of it when I was out there.

"For me, I tried to do the little things well. There was nothing magical, but the foundations have been laid and we can work on that in a long season.

"The magic will come. If I'm doing the little things well, working back, passing and good on the kick-chase that is the foundations."

Wolfpack head coach Brian McDermott avoided commenting specifically on Williams' performance, saying that his star signing would need some time to transition back into the sport.

"I'm not really interested in summarising his performance," McDermott told the BBC.

"This is going to take some time and transition. He got through some tackles and carries.

"He got the biggest cheer of the day when he dropped the ball and got valuable game time."

Williams and the Wolfpack take on Salford in their next match on Sunday (NZ time).