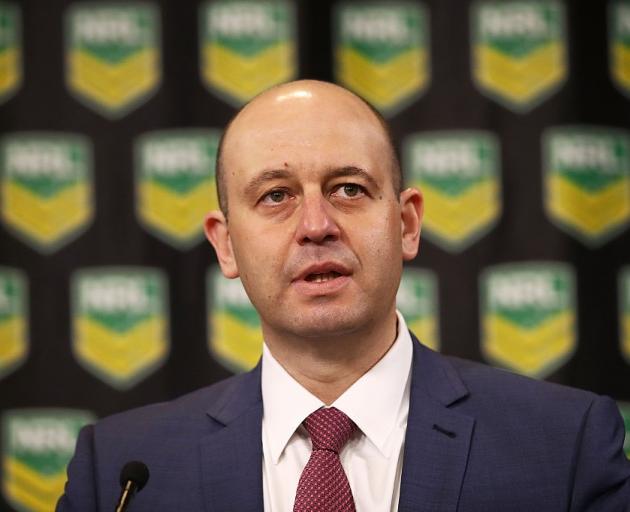 National Rugby League (NRL) Chief Executive Todd Greenberg has resigned with immediate effect after weeks of criticism over his management of the competition as it battles for survival during the coronavirus shutdown.

The Australian Rugby League Commission, an independent board that oversees the game, said in a statement on Monday the decision was "mutually agreed" and came after reflection on "the needs of the game".

“The role of Chief Executive of the NRL is one of the most challenging and difficult roles in Australian sport, with a diversity of passionate stakeholders," ARLC Chairman Peter V'Landys said in a statement.

"ARLC thanks Todd for his contribution to the game over the last seven years and as Chief Executive for the last four years."

The NRL's chief commercial officer Andrew Abdo had been appointed acting CEO while a search is undertaken for a permanent replacement, the ARLC added.

"Nine has invested hundreds of millions in this game over decades and we now find they have profoundly wasted those funds with very little to fall back on to support the clubs, the players and supporters," a Nine spokesman had said.

Greenberg was appointed CEO of the NRL after a five-year stint in charge of Sydney-based team Canterbury and was involved in delivering a record rights deal for the league in 2017.

But his administration has been accused of mismanagement by a slew of former players and media pundits, who have questioned how the game finds itself fighting to stay afloat after years of rising revenues.

Greenberg oversaw the liquidation of a "sustainability fund" in 2017, which was originally planned to have A$80 million ($50.88 million) invested at the end of that year.

Some of the funds were used to help pay for a costly media strategy.

"Despite the variety of challenges and pressures I have loved every single minute of the journey," Greenberg said.

"Our growth over the last four years has been extraordinary and I am very proud of my contribution to the game."

The NRL, the country's most popular spectator sport in the eastern states, intends to resume its 2020 season, interrupted by the coronavirus outbreak after two rounds, on May 28.

Channel Nine chief executive Hugh Marks said earlier on Monday that he was in positive discussions with V'Landys about getting the NRL up and running as soon as possible.

He said he was also pushing the league to adjust its spending.

"One thing I want to see come out of this is that investment goes back into club footy," he told Sydney radio station 2GB.

"It’s the tribalism of rugby league that is its greatest strength.