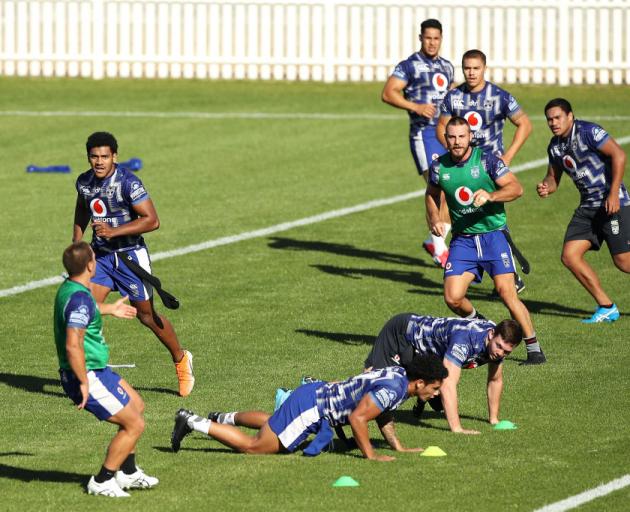 The Warriors train in Tamworth. Photo: Getty Images
The New Zealand Warriors are expected to begin full-contact training today as they enter week two of self-isolation in Australia.

The NRL side flew to the small city on Tamworth in New South Wales last Sunday to begin what could be a five-month stint on Australian soil to complete their season.

The players and coaching staff were set to have two weeks in isolation but it was extended by four days after the late arrival of versatile forward Nathaniel Roache.

There will hopefully be some good news for the players today with coach Stephen Kearney telling Newstalk ZB's Martin Devlin that training should be a bit more full on this week.

Kearney said the Warriors plan to begin full-contact training today after being restricted to training in groups of 10 during their first week.

"It is supposed to kick off tomorrow - the full contact work. We're waiting for confirmation of that," Kearney told Devlin on Sunday.

"It's worked out well that we've been able to focus on some fundamental skill early on in the week, obviously we'll start picking that up once we get together as a full team."

The Warriors confirmed yesterday they will play their 'home' games at Central Coast Stadium.

The new draw for the restarted NRL season, to begin on May 28, is expected to be released this week along with possible changes to the game.

Kearney added he's against the NRL's potential proposal to reduce the referees on the field from two to one.

The NRL's Project Apollo committee last week recommended a switch from two referees to one for when the season returns later this month. It's a move that could save the Australian Rugby League Commission around $1m.

The proposal has the backing of ARL Commission chairman Peter V'landys with an announcement expected this week.

Kearney, however, has joined fellow coaches Des Hasler of Manly and Roosters' Trent Robinson, in opposing the idea of dropping one referee.

"It's just too hard to implement that now. We've been used to two referees for a long time," Kearney told Newstalk ZB's Martin Devlin from the team's base in Tamworth.

"I know there's been a lot of debate about having two referees on the field but to throw that on us in three weeks time, I think that's too big of an adjustment," he added.