Warriors looking to move on

Roger Tuivasa-Sheck prepares to let go of the offload which was ruled forward to deny the Warriors a win at the weekend. Photo: Getty Images
For the Warriors, it's time to clear the slate.

As much as the circumstances of the narrow 24-22 defeat to the Eels hurt, captain Roger Tuivasa-Sheck is refusing to get caught up in what might have been.

Though he thought his flick pass to Gerard Beale was legal, it was ruled forward by the referee, denying what would have probably been a match sealing try, he's not dwelling on that moment, or any of the other incidents in the controversial match.

"We are all disappointed but we are all ready to move on," said Tuivasa-Sheck.

"It's been a couple of days now. We are looking forward to getting back home and playing against the Raiders [on Friday]. The more we focus on what happened before the more energy gets zapped from us."

On Monday the NRL admitted there had been at least three significant errors made by the officials in the second half, all of which went against the Warriors, and changed the momentum of the game.

The referees and the assistant referees, who also oversaw a remarkable 70 minute sequence where the Eels didn't concede a single penalty (while getting nine in their favour) have all been relegated to reserve grade for this weekend, but Tuivasa-Sheck preferred to look in the mirror.

"There were parts of our own game that we could have fixed before it got to that," said Tuivasa-Sheck.

"Fixing all the long distance tries [that the Eels scored], all small things that could have played a part and can control."

Tuivasa-Sheck is a young captain (26), in his third season in the role.

Staying on the right side of the referees — while maintaining an assertive approach — is one of the challenges of being an NRL skipper.

In the latter stages last Saturday Tuivasa-Sheck twice tried to reason with the officials about the lopsided penalty count, without much joy.

"That part is tough, trying to chat with them, trying to make sure we get fair calls," said Tuivasa-Sheck. "At the time I was real frustrated during the game but it is part of the game.

"I'm still learning, learning a lot. I'm trying to make sure [I improve]. Is there a way that I can be better with the way I press the referees? Is there a way I can talk a lot better?"

One of the enduring images from Saturday's game was Tuivasa-Sheck, head bowed, after the late forward pass call was made, with his facial expression conveying a mix of frustration, exhaustion and disbelief.

"That's all I practice, to throw it backwards," said Tuivasa-Sheck of the pass. "At the end of the day it's not up to me, it's up to the guys that are there and that moment's gone.

"I thought I was able to get it backwards, but again it's hard to keep going on about it. We didn't get the two points and we'll move on."

Centre Blake Ayshford has vivid memories of that moment in the 77th minute.

"He makes the break and I just tried to get inside [him]," said Ayshford. "He threw the pass, it was on the money to Bealey, we all went up because we thought it was a try. It was hard because it was the ref and not the touchie that called it."

Like Tuivasa-Sheck, Ayshford has put the game behind him, but admitted there was a period of kicking stones in the 24 hours after the match, especially as they were anticipating the mea culpa from the NRL.

"I've wiped a lot of it now, because we are so close to the next game but Saturday and Sunday were pretty hard," said Ayshford. "Knowing what was going to come, but that it wouldn't help us in any way. And we are not a team of excuses, we can use that but where does that get us?" 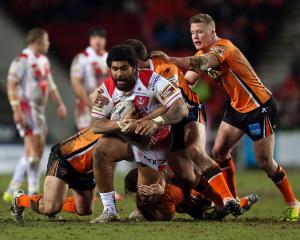