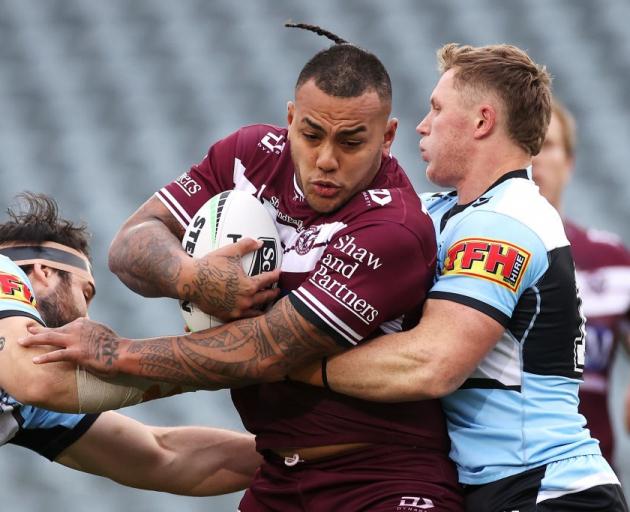 Manly prop Addin Fonua-Blake takes the ball into a tackle against the Sharks earlier this year. Photo: Getty Images
The Warriors have reportedly swooped in with an offer of $850,000 a season to snatch Addin Fonua-Blake away from the Manly Sea Eagles.

According to Australian media, the prop is set to be without a club beyond 2020, after being sensationally granted permission to explore other opportunities on compassionate grounds.

The Tongan international reportedly wants to relocate outside of Sydney with his family, which sets him up as a potential recruit for nine other NRL clubs.

One of those, the Warriors, are apparently the front-runners to swoop in and grab one of the game's form props and more reliable metre-eaters.

Fox Sports' chief league reporter James Hooper told NRL360 the Warriors have matched his current deal with the Manly - worth $850,000 a season. Due to salary cap struggles the Sea Eagles have reportedly let him go.

Sea Eagles teammate Curtis Sironen told NRL Tonight it was a shock loss for the club.

"He addressed the group this morning, he didn't go into detail but just said it's going to be what's best for him at the moment and his family and he wants to enjoy the last couple of weeks with us," Sironen said.

"As a mate we all back him, I'm not looking forward to tackling the big unit. It's disappointing on that front but you just wish him the best, that's just the game we play."

Fonua-Blake's addition would inject an established presence into an already deep forward pack for 2021, that also gets Kane Evans and Ben Murdoch-Masila.

One thing that strengthens a potential marriage between player and club, is Fonua-Blake's wife has family based in New Zealand. While the Warriors face the prospect of basing themselves in Australia once again for next season, ties to New Zealand could be a clincher in locking down the 24-year-old long term.

Manly released a statement confirming Fonua-Blake will enter discussions with rival clubs for a contract beyond this year, and they "will look favourably upon a request to release" him.

"The club has advised Addin and his manager that this matter needs to be resolved promptly so that all parties can confidently plan for the future."

The Brisbane Broncos were believed to be the initial front-runners, before sources within the club revealed they have no room under their salary cap.

He is averaging 167 metres and 75 post contract metres through 15 games in 2020, and was recently voted as the best middle-forward in the game by his peers in a survey.

However, behavior has not exactly been a hallmark of his player personality. In July, he copped a two-match ban and a $20,000 fine for calling referee Grant Atkins a 'f***ing retard', as well as being one of a number of players to refuse receiving flu vaccinations that were mandatory for players to cross the Queensland border.

The form of 'exit' Manly favour is unclear at this stage. The Warriors could be tasked to give up a player or even pay a fee.

If a player swap was requested, the Warriors would have a number of assets at their disposal in the forwards department. The most tantalising to give up would likely be Bunty Afoa, who the club granted permission to also seek out options with other clubs beyond this year.

A team that could emerge as another contender is the Dragons, who have over $1 million in cap room and have been unsuccessful in courting to other middle forwards in Penrith's James Tamou and Melbourne's Christian Welch.

Fonua-Blake has previously lived in Wollongong, the locations of one of the Dragons two home grounds.