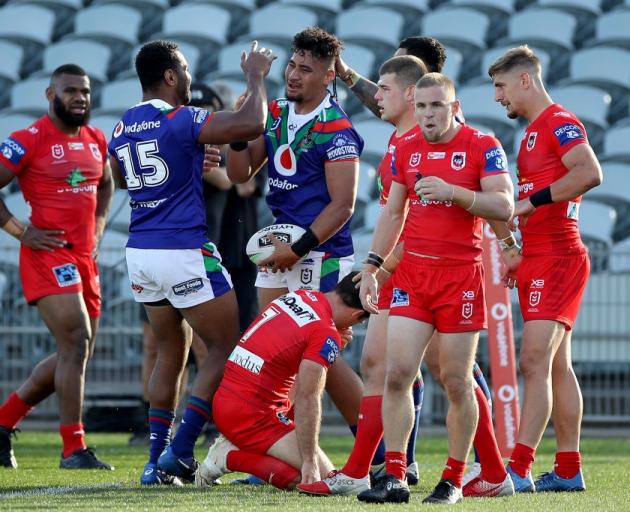 Eliesa Katoa celebrates a try for the Warriors against the Dragons last weekend. Photo: Getty Images
Viliame Kikau has been identified as an "alarm bell" player by the Warriors, but the Kiwi club will unleash two wide strike weapons of their own in Friday's NRL match against Penrith.

Power running on the edge shapes as a decisive factor in the clash at Campbelltown Stadium, with rookie Eliesa Katoa having emerged as a stunning find for the Warriors.

Katoa is a player with "no ceiling" according to teammate Tohu Harris, who has seen few 20-year-olds boasting the same mixture of physicality and desire.

The Tongan-born strike runner was the Warriors' player of the match in their two losses before lockdown while he made big dents in St George Illawarra during last week's 18-0 win in Gosford.

"For someone who's pretty quiet and young, he doesn't like losing at things. If he gets challenged, his first reaction is to try and meet that challenge."

Katoa is a new-look version of Kikau, the Fijian international who terrorises defences with his size and footwork down the Panthers left edge.

Harris will line up directly opposite the 25-year-old, who registered two line breaks and a try in last week's 14-14 draw with Newcastle.

"Defensively we have to be a lot more urgent when the ball's near him," Harris said.

"It's turning the alarm bells on. The urgency of everyone in the line needs to go up a level when players like him have the ball."

However, Penrith and Kikau may need to be just as wary of Harris, who lacks the same impact player status but was the stand out Warriors forward last week.

The lanky second-rower celebrated his 150th NRL match with a compelling 182 running metres and 43 tackles.

"I don't know if I've ever done that before. If I have, I don't remember it," the former Melbourne Storm workhorse said of his numbers.