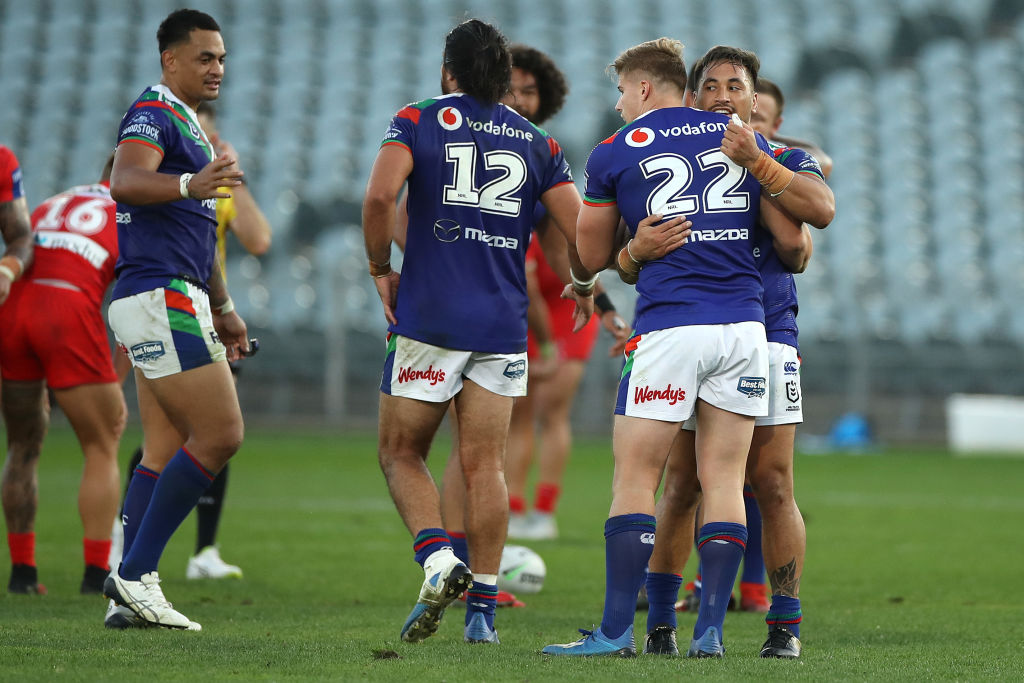 The unfancied Warriors relaunched their season with a stunning 18-0 demolition job on the St George-Illawarra Dragons.

On the back of a near perfect completion rate (45/47 – their 45 completed sets a NRL record), Nikorima chose his moments perfectly, while fellow half Blake Green was also a commanding figure.

A mistake from interchange forward Jack Murchie in the 75th minute ruined what was a perfect 44/44 completion record, but the damage had been done by then.

The Warriors are the darlings of the NRL, after agreeing to camp in Australia during the virus crisis. The two teams formed a joint huddle at the match end, as the nomad Warriors continued to take plaudits for their extended, pandemic-related road trip.

But captain Roger Tuivasa-Sheck played down their special status after the shock win.

"It wasn't about putting emotions on and doing it for someone else," he said, in his typically matter-of-fact way.

"It was about us being one of the 16 clubs and getting a job done."

On the down side, Peta Hiku (ribs) and King Vuniyayawa (neck) could join the injury list, and prop Agnatius Paasi is on report for an illegal tackle on kicker Corey Norman. And the Warriors can't afford to lose props.

The glow of victory trumps those issues for now.

The Warriors players finished the match with whoops of delight, as Ken Maumalo dislodged the ball from Mikaele Ravalawa's grasp as the big wing looked set to give the Dragons a consolation score.

Not all of the Warriors' option taking was on the mark. Far from it. But that hardly mattered, under these circumstances.

Having had to camp in Australia because of Covid-19, and after poor opening performances against the Knights and Raiders, Stephen Kearney's Warriors have forced the pundits to think again about their season prospects.

"It means a great deal, not only to the group, but to the families back home," Kearney said.

"We've got a footy club still operating. I'm really proud about how (the players) have gone about the last couple of months.

"The goodwill has been out there from the rugby league community and it has been really, really nice (but) we've got to make sure we back this up."

The Warriors will face much tougher tests than this, but this was a start beyond their fans' wildest dreams.

Possession is the key under rule tweaks made during the NRL hiatus. The Warriors' ball security was incredible, with two errors in the final minutes coming after 44 completed sets.

The winless Dragons are not the best of yardsticks in the NRL, with uncertainty over coach Paul McGregor's future reflecting troubled times.

But they were moderate favourites against a New Zealand side which had managed just one penalty try across their first two games, and are dealing with an injury crisis.

Nikorima and Green were full of ideas and in sync while the Dragons ground to a halt, their halves Ben Hunt - who developed a leg problem during the game - and particularly Norman looking lost.

Tries to bargain recruits Jamayne Taunoa-Brown and Eliesa Katoa gave the Warriors a 12-0 lead at halftime.

A great pickup from Taunoa-Brown, when fullback Matt Dufty spilled the ball, had brought the Warriors their first try. Green drifted across field and Nikorima provided the killer pass, as Katoa steamrolled past Hunt to the tryline for the second.

The 20-year-old Katoa, playing on the left edge, confirmed his potential as a future star with strong runs and a fabulous try saving stop on rampaging Dragons prop Josh Kerr.

The energetic Nikorima put the Warriors well on the way to victory early in the second half with a midfield break, which Green managed to keep alive, perhaps fortuitously. Nikorima wriggled over the line for an 18-0 lead which was never threatened.

The Warriors didn't have it easy, finishing the first spell with only 14 available players which included Murchie, recruited from the Raiders a few days ago.

Blair and Katoa were having head assessments - which they passed - while Hiku was already in the dressing room with a rib problem, and did not return.

This meant they finished the game with hooker Karl Lawton covering for Hiku in the centres, but they hardly missed a beat.

"It just worked out for us today," said Kearney.