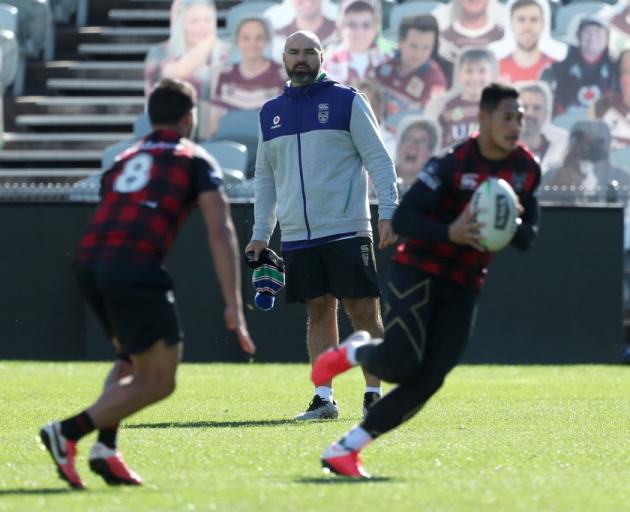 Todd Payten watches on as Roger Tuivasa-Sheck carries the ball during training. Photo: Getty Images
The high-flying New Zealand Warriors have suffered a cruel double blow as they attempt to keep alive their slim chance of reaching the NRL finals.

The club, who occupy the ninth spot on the competition ladder just four points from the playoff spots with four weeks left, have been forced into four changes for Sunday's clash against the Parramatta Eels with rookie sensation Eliesa Katoa among the casualties.

Second rower Katoa has been ruled out for at least a fortnight with an injury to his left hand suffered in the victory against the Newcastle Knights at the weekend.

The Warriors beat the Knights 36-6 — their first win against a top eight side this Covid-19-disrupted season and arguably their most impressive.

To add to interim coach Todd Payten's woes, the Warriors' request to use George Jennings and Daniel Alvaro, on loan from the Eels, has been turned down.

"We've had Parramatta deny our request for their loan players to play this week, which I can understand. And we've had Eli Katoa ... he underwent surgery last night," Payten told Newstalk ZB's D'Arcy Waldegrave. "We've named everyone that's fit and available in our squad that's left to take the park and that is a total of 20 players."

Katoa has been replaced by Jack Murchie, who comes off the bench into the run-on side, with Josh Curran and Isaiah Papali'i coming on to the interchange as forward reserves due to Jennings and Alvaro being unavailable to play their parent side.

Veteran back Gerard Beale comes in for Jennings on the wing for his seventh appearance of the season.

According to Payten, the setback won't detract from the third-placed Eels who were crushed 38-0 by the South Sydney Rabbitohs in their last match.

"We've had a number of issues that have arisen from day to day and week to week in the past four months and we're at the point now where we're just used to it and we get on with it," Payten said.

"There have been times over the past 18 months where things have gone against us and we have not handled it well.

"That comes with confidence and belief ... that performance [against the Knights] has been building for a while," he said.

Payten replaced Stephen Kearney as head coach in June but turned down the opportunity to take the reins full-time last month.

Nathan Brown has since been appointed as the new Warriors mentor from next season, while Payten has reportedly been given a three-year deal with the North Queensland Cowboys.

However, the 41-year-old former prop refused to confirm his appointment. "I'm not really in a position to comment but ... I haven't been distracted one little bit.

"We're pretty well focused on what we're trying to achieve [at the Warriors]. We're building something nicely here," Payten said.

"This is going to be our biggest test. They'll be really desperate. They're not playing great at the moment and they got their butts whipped last week.

"For us, it's not getting carried away. There's still a way to go if we want to play on beyond week 20."