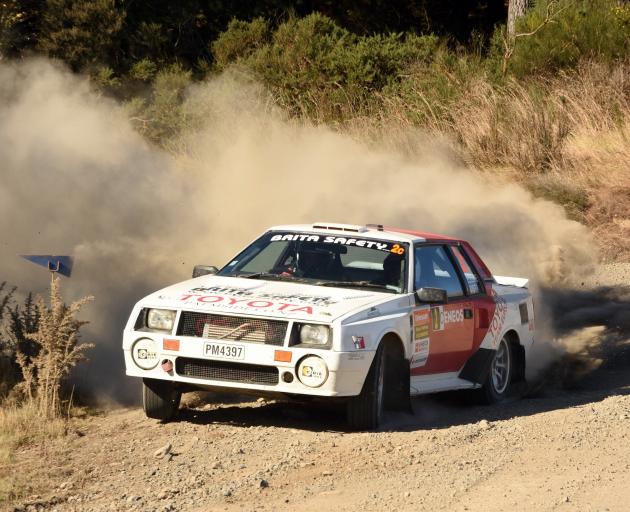 Dean Buist is about to re-take the classic rally lead in special stage 15, near Berwick, yesterday. PHOTO: DAVID THOMSON
Deane Buist has added a rare third Otago Classic Rally trophy to his cabinet after triumphing in his much-anticipated battle against fellow Cantabrian Jeff Judd.

It was Judd who grabbed the early initiative as the rally commenced in East Otago on Saturday morning.

However, by the end of day it was Buist who held the advantage, having powered his Toyota Celica Turbo to four stage wins, to Judd’s three.

Buist’s 30sec lead then became a 30sec deficit when a fuel pump failure delayed him before yesterday’s first stage had even commenced.

Hampered also by the loss of third gear, Buist seemed to be on the back foot, until Judd’s rally came to an end in the demanding Circle Hill stage.

That left Buist, who also won the Otago Rally outright in 1992, to claim the third Otago classic title of his career.

Fittingly, for a driver known for his versatility, this year’s win in a rear-drive turbo-charged Toyota followed a 2007 victory in a rear-drive non-turbo Ford Escort, and 2021 success in a front-drive Volkswagen Golf.

With Judd’s demise, it was left to another Cantabrian, John Silcock, to claim classic runner-up honours.

The popular Mazda RX7 driver won a string of stages on yesterday’s second leg, but said he had not been brave enough in Saturday’s very dusty conditions to challenge for the classic win.

Unlike Buist and Judd, Silcock, however, is contesting the national championship classic title, and was also mindful of the need to get that multi-event campaign off to a strong start.

Fourth place in the classics went to Marlborough driver Jonty Brenssell (Toyota Starlet), who overhauled Waimate’s Deborah Kibble, as she limped to the finish with an ailing turbocharger on her Mitsubishi Lancer after a strong run.

Cambridge driver Anthony Jones and Christchurch’s Tim McIvor powered their Ford Escort’s to sixth and seventh in the classics, ahead of impressive rally newcomer and renowned drifting expert ‘‘Fanga Dan’’ (aka Daniel Woolhouse).

Woolhouse was hugely impressive on his classic rallying debut, gaining confidence and pace in his Ford Escort as the event progressed

He finished ninth in the classics, with Dippie completing the classic top 10.

Amid many tough-luck classic rally stories, none could match that of veteran campaigner Graeme Coey, whose Mitsubishi Lancer was reduced to a charred shell after crashing off the road and subsequently catching fire on Saturday’s 13th stage.

The stage was stopped and then cancelled as fire crews attended the scene and Coey and co-driver James Cowles, both of who had exited the car well before the fire erupted, were conveyed to hospital for precautionary check-ups.

Victory in the four-wheel drive component of the classic rally went to Steve Cox ahead of fellow Aucklander Amy Keighley, both in Subaru Imprezas, and with Keighly co-driven by Dunedin’s Nikita Gibson.

The classic 4WD category also featured Olympic rowing great Hamish Bond, who showed plenty of promise and a decent turn of speed before being sidelined with gearbox problems on both days.

“I was pretty busy behind the wheel and certainly didn’t get much chance to enjoy the scenery,” Bond admitted.

“At least when we stopped on the second day we were parked up in a great spot to watch Hayden [Paddon] and Emma [Gilmour] go by. They were awesome.” 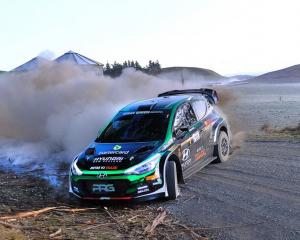 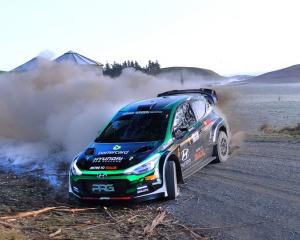 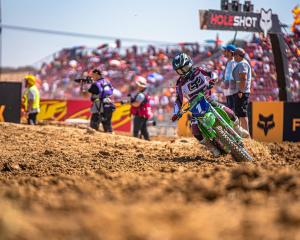 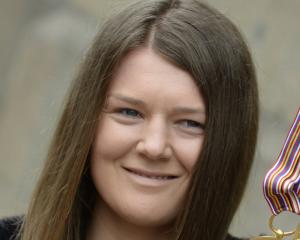