Dunedin's Courtney Duncan has won her second consecutive FIM Women’s Motocross World Championship - by the skin of her teeth - in a tense and dramatic race in Italy.

The 24-year-old rider will be bringing the gold plate and winner’s trophy back to New Zealand following one of the most dramatic ends to the Covid-shortened season in Italy on Saturday (local time).

Courtney Duncan. Photo: ODT files
Race commentators at the hard-pack Pietramurata track for the final MXGP of Trentino witnessed something extremely special in person and Duncan’s supporters could only watch on screens - with the event run behind closed doors - as she produced the ride of her career in the penultimate race.

The WMX was down to the wire as just four points separated championship leader Nancy Van De Ven, of The Netherlands from DRT Kawasaki’s Duncan.

Germany’s Larissa Papenmeier was only a further 2 points back on 160 and Kiara Fontanesi not far behind too on 156 points.

As the women exited the gate, Duncan had the worst possible start, as another rider cut in front of her causing her to lose her balance. Her front wheel came up, she clipped the back of Van De Ven and hit the dirt.

Unhurt, a determined Duncan jumped back on board her Kawasaki KX250 and in her favour was the fact that Van De Ven and Fontanesi also went down on the first corner.

Coming from dead, last the Kiwi rode the race of her life as she carved her way systematically through the field on a seemingly impossible hunt to catch race leader Papenmeier.

What an incredible performance from Courtney Duncan in the first WMX race! Going from almost last to winning! 🔥 #MXGPTrentino #MXGP #Motocross pic.twitter.com/yl1t5BU2KE

As the 20 minutes, plus 2 laps ticked on by, Duncan kept notching up the passes - using lines no one else was prepared to use and double-jumping some of the jumps, she set up an epic final showdown with Papenmeier.

With 8 minutes to go and 20 seconds down on the German rider, Duncan’s task seemed out of reach, yet she kept the pressure on. Finally Papenmeier crumbled, losing the front end of her motorbike in the third to last lap and going down - her 10 second lead swiftly evaporating.

Taking the lead on the last lap, Duncan shot ahead to claim an incredibly vital and well-deserved fifth win of the season by 2.04 seconds from Papenmeier, with The Netherland’s Lynn Valk in third. As Van De Den and Fontanesi finished fifth and sixth respectively, it gave Duncan an all-important five-point buffer going into the season’s final race only hours later.

“The start was terrible and I went down. Thankfully a couple of the others went down as well. It was such a crazy race. I’ve got to thank my team in the pit box, they were keeping me on it - letting me know how I was sitting.

"Definitely proud of how I stayed composed out there in that situation. This is far from done. We’ve got one more to go and you bet I’m going to fight for it,” a fired-up Duncan said. 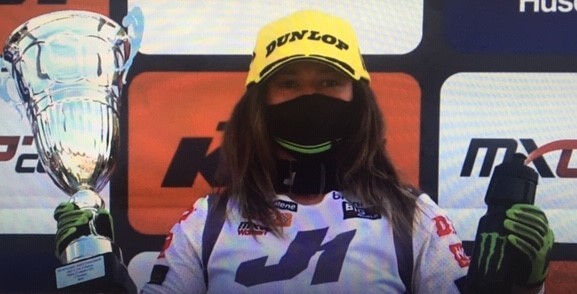 Courtney Duncan on the podium in Trentino. Photo: MXGP
As the gate dropped the Kiwi found herself in fifth into the first corner on a track that was not easy. Rugged and deeply rutted, it was going to challenge the best female riders in the world. The Kiwi took her time making her moves, mindful of the fact that her hold on the championship was tenuous at best.

By lap 6 she was only 2 seconds down on the leader Van De Ven as they hit lapped traffic. After a six-lap battle a resolute Fontanesi made a move on Duncan, passing her for second. Staying calm, Duncan did what she had to do and rode smart to finish third and defend her world championship crown.

By the end of the race, both Van De Ven and Duncan were tied on 207 points, and the championship was decided on race wins. It was Duncan’s victories in Matterley Basin, Mantova and Trentino today, which helped her secure the gold plate for the second year in a row.

Van De Ven was forced to settle for a silver medal this season, while Papenmeier took bronze.

Duncan’s season played out with a perfect first weekend at Matterley Basin with two wins; a slip down the rankings with fourth and second at Valkenswaard; a win and DNF at Mantova and she bounced back with second and a first at the same track only three days later.

Duncan, who grew up in the small Otago town of Palmerston,  cried tears of happiness as she gave her post-race interview.

“I’m so speechless. Just with all the uncertainty - it’s been just such a difficult year for me this year. That huge crash in Mantova, to get back to my bike and see my handlebars bent. I just thought no, is this championship done?

"But I kept believing and when the times got tough, we kept going. I have to thank my whole team, everyone that supports me. This one is for everyone, I can’t do this alone, so thank you!”

“It was so close. Coming into the final round all the girls were riding really well. The points were separated by 10 so we were probably all put under the pump this weekend.

"Thankfully I got that first race win because Nancy and Kiara were on it in the second one and set a really good pace. I’m so grateful. I’ve had a lot of tough times and to come through and get this championship it feels really good.

“Thanks to all the girls for a really good challenging year. It’s good for the fans who are not here and watching on TV and when a championship is close, I think everyone enjoys it. We will enjoy this one!”

Kawasaki New Zealand’s managing director Shane Verhoeven said: “I think we all witnessed a true champion at Trentino this weekend. Well done to Courtney and the Dixon Racing Team for an outstanding effort to bring the championship home after being dealt a bad hand of cards in the first race and still come up trumps.”

Duncan heads back to New Zealand next week and will begin her two-week quarantine.