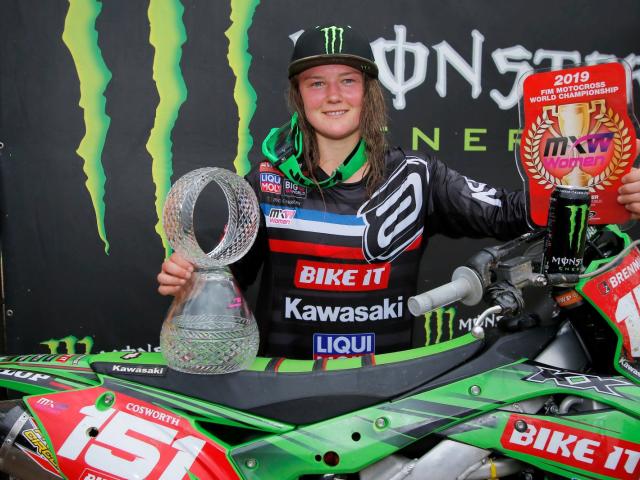 The 23-year-old Kiwi superstar could win the Women's Motocross World Championship early next month after sealing her third set of double victories at the MXGP of Italy at the weekend.

Giving herself a 23-point lead, Duncan has all but sealed the deal to lift the trophy for the first time in her fourth attempt at the world championships.

As long as Duncan can deliver a similar performance in Turkey next month to the efforts she has produced so far, it will be difficult for German rider Larissa Papenmeier, in second place, to pass the the New Zealander on points.

Duncan is on 189 points and has won seven out of the eight races contested.

A rider receives 25 points for winning but second is worth 22 points so with two second placings at the weekend, Papenmeier is still handily placed.

Duncan knows it has been no easy feat to reach where she sits on the table.

A small fall during her first of two races at the circuit in Imola, Italy, led to Duncan having to grind hard to fight her way back to first place.

Duncan's main focus during the race was to not allow herself to lose too many points which could risk jeopardising her title win.

"It was really difficult for me. The track changed a lot from qualifying to the first moto," she said.

"It took a while to adapt to the conditions. I wasn't willing to do anything more than I had to do to protect my championship lead."

A slightly more comfortable win in the second race has Duncan feeling excited and optimistic heading into the final races next month.

"It's a good weekend if you can extend your lead in the championship and get two wins. It didn't come easy for me though.

"It was a hard pack and slick. They put a lot of water down so I had to be careful not to make too many mistakes because it could catch me out.

"I didn't get into that nice rhythm until about halfway through the races.

" It feels even better when you win like that.

"I'm in a good position heading into the final round in Turkey in three weeks' time."

The first corner is crucial to Duncan despite it not being the deciding factor as to who wins the race.

"It means you're not covered in mud."

Being in front early means Duncan will be away from risk, meaning fewer people to crash into, and leaving it up to the New Zealand star.

That will be her tactic in the last round of races in Turkey - getting out in front and staying there.

The Palmerston rider is unlikely to return to New Zealand before then.