Ostberg's pace too much for Ross 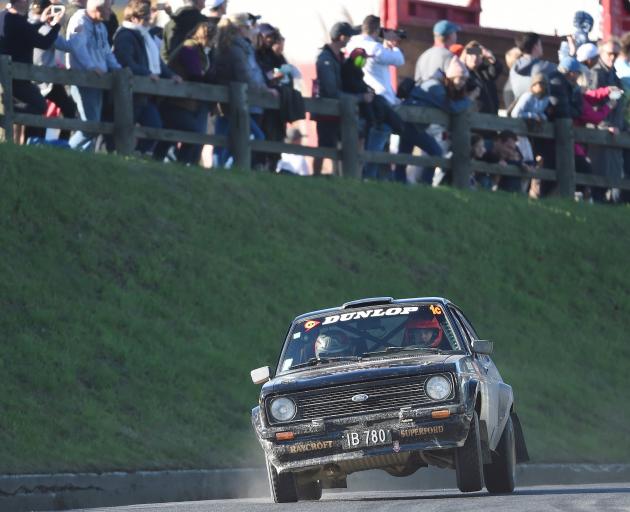 Norwegians Mads Ostberg and Torstein Eriksen handle a Ford Escort RS1800 in the Dunedin special stage on Saturday afternoon.PHOTO: GREGOR RICHARDSON
Last year's winner Regan Ross did his best to take the fight to world rally championship star Mads Ostberg, but in the end there was no denying the Norwegian ace his maiden Otago Classic win.

Fastest classic competitor through 11 of the rally's 15 special stages, Ostberg ran out the winner by a margin of almost two minutes, making up for the disappointment of 2017, when mechanical issues prevented him from challenging for victory.

Though he led the classic event from start to finish, Ostberg admitted to feeling pressure from Kaikoura-based Ross early on, but countered that with a tactical approach.

"The stages here are all fantastic, but there are some where local knowledge is less of an advantage than others," Ostberg explained.

"My plan was always to pick those stages when local knowledge counted for less to push hardest on."

Ostberg was aided in his approach by niggling mechanical problems that dented Ross's ability to compete, though Ross allowed he was driving with huge commitment to stay in touch with Ostberg early on, and might have struggled to maintain that pace regardless of any other issues.

"The more time Mads spends in the car the better he gets to know it and the faster he gets," Ross said.

"It was a great scrap early on, but I've just got no answer for his pace, on the longer stages, in particular."

Indeed, once he lost time with his mechanical issues, Ross found himself pitched into a tight battle for second place with another former Otago Classic winner, Derek Ayson (Gore). That battle was at peak intensity on Sunday, when Ross whittled back Ayson's advantage from 16 seconds at the start of the day to just under seven seconds with two stages to run. Ayson responded by narrowly beating Ross on the final two stages, to secure second place by 7.6sec.

All three of the top classic finishers drove Ford Escort Mk2's, as did the next four classic finishers, too. They were Jeff Judd (Christchurch), Graham Ferguson (Greymouth) and Australian's Stewart Reid and Grant Walker.

The classic top 10 was rounded out by Bay of Plenty driver Andy Martin in a Mazda RX3, Australian Darren Snooks (Datsun Stanza), and Dunedin husband-and-wife pairing Richie and Rachel Chadwick (Toyota Corolla). Notching up their first Otago Rally finish, the Chadwicks were also the first all-Otago combination in both the classic and overall event, and winners of their classic rally class.