Paddon in league of own over Otago roads 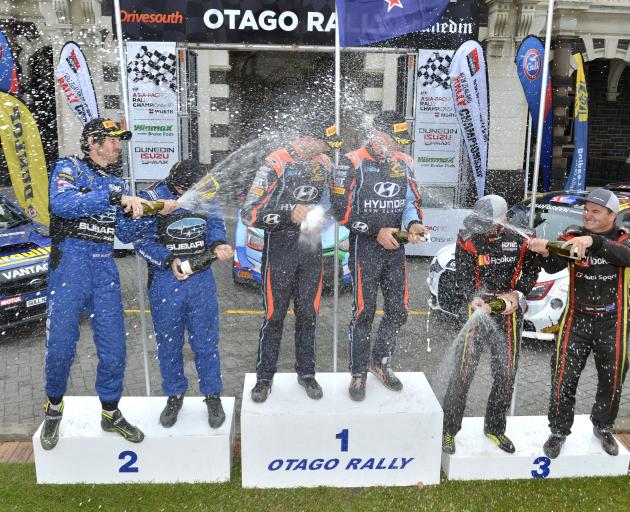 Otago Rally winners Hayden Paddon and John Kennard are sprayed by Ben Hunt and Tony Rawstorn (left) and Dylan Turner and Malcolm Read on the podium outside the Dunedin Railway Station yesterday.PHOTO: GERARD O'BRIEN
Records were smashed and benchmarks set as Hayden Paddon showed his star class, powering to an emphatic victory on the Otago Rally at the weekend.

The Cromwell-based rally professional broke all but one stage record as he steered his Hyundai i20 AP4+ to a massive 7min 16sec win over fellow Kiwi drivers Ben Hunt and Dylan Turner.

While expected, Paddon's win - his seventh at Otago - was anything but dull for the hundreds of fans who turned out to watch as drivers headed south of Dunedin on Saturday, and then into North Otago yesterday.

Instead, the absolute commitment of Paddon and co-driver John Kennard as they powered flat-out over the event's most difficult crests and through its most challenging bends drew gasps of awe and admiration in equal measure; where others lifted off, if only for a fraction of a second, Paddon was hard on the gas, and even when he did not look the most spectacular, he was still quickest by far.

His final tally stood at 14 special stage wins, nine of which set record times for the stage concerned, and five of which set benchmarks for stages being used for the first time. 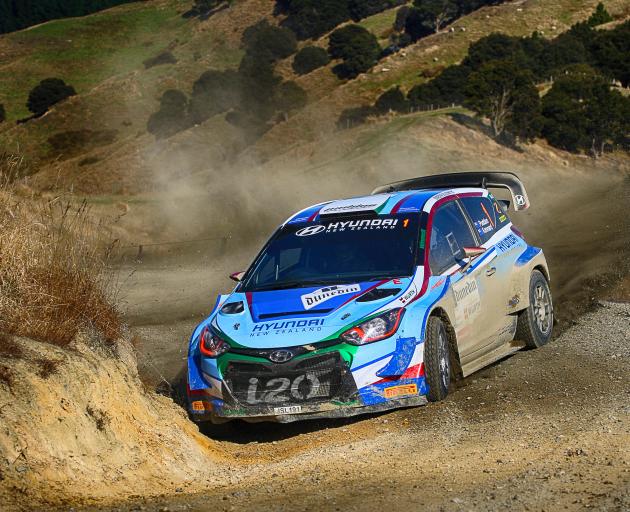 Cromwell-based Hyundai driver Hayden Paddon demonstrates his winning style during the Otago Rally at the weekend.PHOTO: JOHN COSGROVE
All that stood between Paddon and a clean sweep of special stage wins was a puncture on the Anzac Ave superspecial late on Saturday.

While the 26 seconds lost was inconsequential in the context of his lead, Paddon's misfortune left the way clear for former national champion Hunt to top that stage's times in his Subaru Impreza.

By the rally finish, Hunt was standing one step below Paddon on the podium, rally runner-up after a ding-dong battle with fellow Aucklander Turner (Audi A2 AP4) and Australian visitor Brendan Reeves (Ford Fiesta AP4).

Early on, Reeves was the quickest of the trio, but he dropped out of contention when his car's alternator failed late on Saturday. Turner then came to the fore, ending the rally's opening leg 11.5sec clear of Hunt after driving particularly well on the final two gravel stages of the day.

The advantage swung back to Hunt yesterday, as he charged hard on the opening five North Otago stages to move over half a minute clear, and then he consolidated that edge on the final stages.

"The gap between us was pretty narrow at the end of Saturday, so my plan for Sunday was to come out hard," Hunt said.

Turner was, by his own admission, "caught a little asleep" by his rival's early pace yesterday. Feeling by late morning that he could not really fight back without taking silly risks, he decided to drive more conservatively to ensure he secured a good haul of national championship points.

The battle for podium honours should also have featured Rangiora's Matt Summerfield, whose stage times were consistently quick . However he was forced to play catch-up after a puncture on Saturday morning. His come-back from outside the top 50 after the flat tyre to eighth was one of the sensations of the event.

Among the other fancied starters, Emma Gilmour, David Holder, and Raana Horan failed to finish. Gilmour and Horan struck trouble early, with Horan damaging his Skoda in a crash on the first special stage and Gilmour forced to withdraw her Suzuki Swift with an overheating issue after showing good pace. Holder's problems included a driveshaft failure then a fuel pump failure yesterday.

In all, 75 of the rally's 127 starters completed the full event.