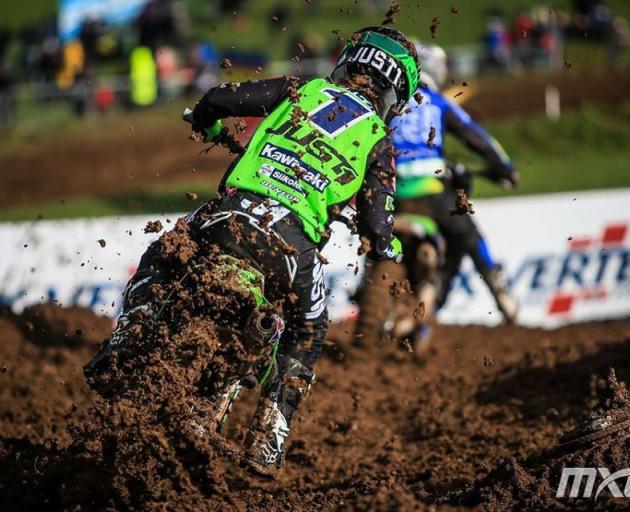 Palmerston's Courtney Duncan shows her style on the way to winning both the races at the opening WMX race in Matterley Basin in the United Kingdom yesterday. PHOTO: MXGP
Palmerston's defending world motocross champion Courtney Duncan said she was rusty in her first races of the new season — feel sorry for her rivals when she hits full stride.

Duncan won both her races at he MXGP Great Britain, bagging the maximum 50 points.

Battling through deep mud and ruts at the season-opening MXGP Great Britain at the popular British circuit of Matterley Basin, near Southampton, the 24-year-old steered her 2020 Kawasaki KX250 to the front in both races.

She was the first to admit she took some time to warm into her winning ways.

"I’m happy to go 1-1 here at the opener. I felt a little bit rusty, a little bit off the pace, but that’s a given since I haven’t raced in six months," she said.

"I’m very happy to walk away with the full 50 points and I think we can be proud of that especially given the conditions — they weren’t easy. They were pretty difficult out there with a lot of mud."

In the first race, Duncan got a good start, but her time in the lead was cut short as Dutch woman Nancy Van De Ven applied the pressure and jumped into the lead in the opening lap.

Returning six-time WMX champion Italy’s Kiara Fontanesi was not far behind in third.

In the later stages, Sara Andersen, of Denmark was chasing Duncan and Van De Ven before crashing on the finish jump. Then, with eight minutes left, Van De Ven found herself in trouble which allowed Duncan to gain back the lead.

The New Zealand rider went on to comfortably win the race by 11.56 seconds over Fontanesi, with Lynn Valk, of the Netherlands in third.

In the second race, Duncan got into the same groove that enabled her to win nine out the 10 WMX races last season and she stormed through to the chequered flag, claiming victory by just over five seconds from Germany’s Larissa Papenmeier.

Duncan heads to the Valkenswaard track in the Netherlands this weekend for round two of six in this season’s WMX, with the championship leader’s red plate and the confidence that she has got plenty more left in the tank.

"I’m stoked to get the first-round win. I couldn’t ask for more. I can only go up from here.

"My goal is to just continue to improve and I think I can do that. The more bike time I get on the race bike with testing, I can up the pace. I look at improving each day and each race as it comes."