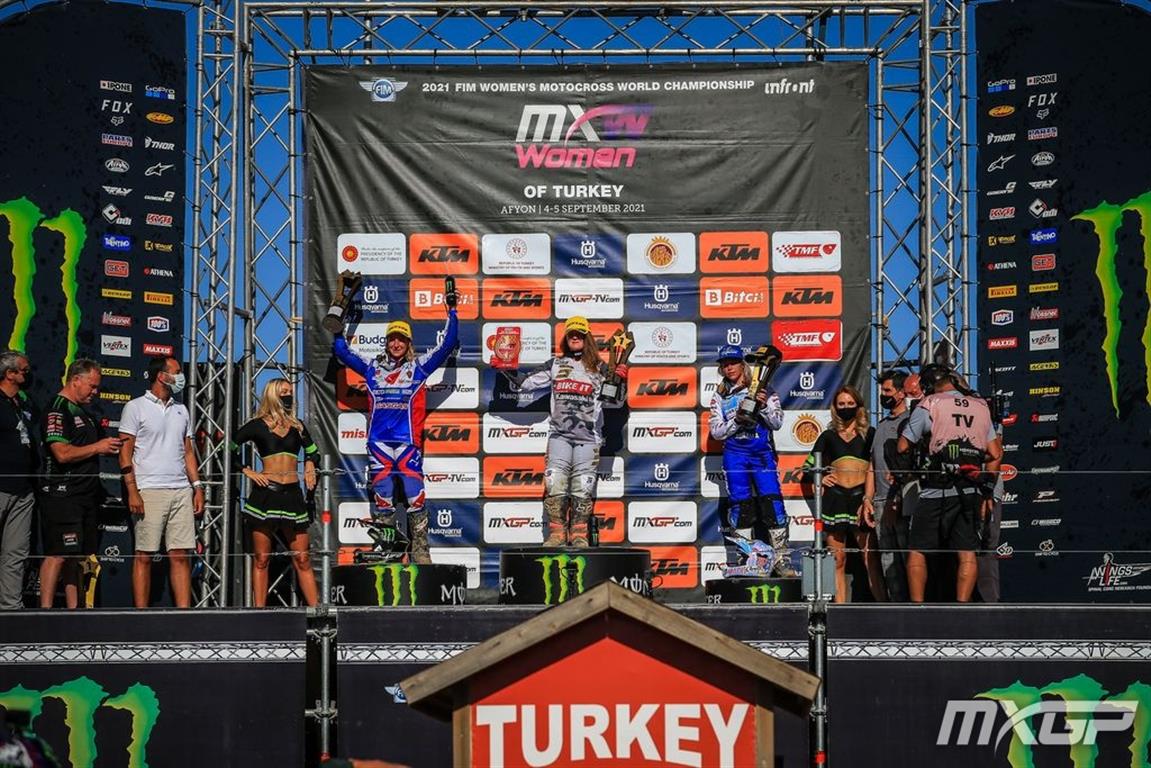 Courtney Duncan on the podium at the Turkey MXGP. Photo: MXGP
“Going 2-1 for the overall and taking the red plate back. Can’t go too much better than that.”

That is how Otago motocross star Courtney Duncan summed up her successful day of racing at the MXGP of Turkey.

The bounce-back was all part of the defending world champion’s plan, and she now heads Italian rider Kiara Fontanesi by a healthy 15 points with previous round winner Shana van der Vlist, of the Netherlands, dropping back to third overall.

The racing up front was as fierce as the temperatures, which rose to about 30degC at the Afyonkarahisar circuit, with Bike IT MTX Kawasaki’s Duncan locked in tussles with Fontanesi for the majority of the two races.

“I had some good battles with Kiara,’’ Duncan said.

‘‘She got me in the first one when I made a slight mistake and went off the track. I lost about 12 seconds, so I gave up too much time there but salvaged second.’’

Germany’s Larissa Papenmeier had grabbed the holeshot earlier in the race but faded and allowed Duncan, Fontanesi and Belgium’s Armandine Verstappen through.

With Duncan in the lead, Fontanesi was looking to work away at the 5.52sec gap between her and the race leader, while Dutch rider Nancy Van De Ven pushed to pass Papenmeier.

Fontanesi then set the fastest lap of the race as she closed in on the Kawasaki rider while Van De Ven was finally able to take fourth from Papenmeier.

A couple of laps later, Fontanesi was on Duncan’s rear tyre. A small mistake presented Fontanesi with the perfect opportunity to get her GasGas machine out in front as she took the lead on lap eight.

Duncan was looking to fight back but went off track. Fontanesi won the race with Duncan second and Verstappen holding on to third.

In the second race, the two multi-time champions battled it out again.

“I followed Kiara for the whole race. I felt like I had a bit more speed, but it was just difficult to make passes as the rack was quite one-lined,”  Duncan said.

Van De Ven then took the lead with Fontanesi getting around Duncan for second. By the end of the opening lap, there was a lead change as Fontanesi was able to get good drive and hustle past the Dutchwoman.

Duncan passed Van De Ven for second place and after dicing with her for a few laps put her head down to close in on Fontanesi.

She got the gap down to 0.88sec and it was game on. As the Kiwi continued to push, she made a mistake which allowed Fontanesi to run away.

This reprieve didn’t last long as Duncan clocked in some very fast laps on her Kawasaki KX250 to end up breathing down the Italian’s neck again.

“I rode patient and stayed composed out there,’’ Duncan said.

‘‘Then I saw the one-lap card come up and knew if I wanted to have a go, I had to do it now.

I left it until the second to last corner and gave it everything.

“I was very stoked to get that win in the second race, extend my points lead and get that red plate.’’