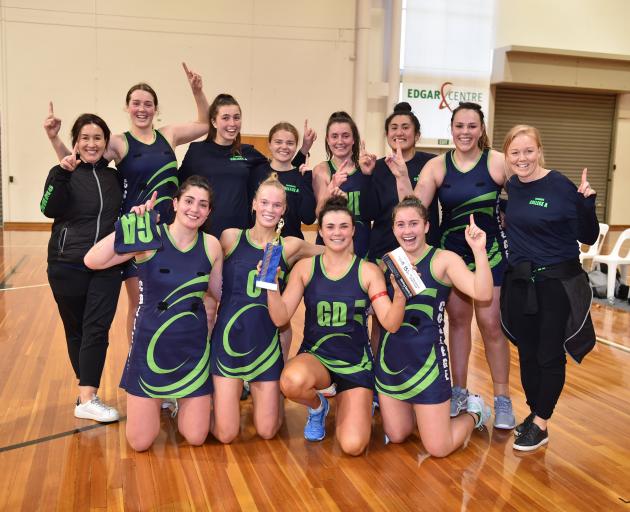 College players and staff celebrate beating Southern Magpies in the final of the Dunedin premier A netball competition at the More FM Arena yesterday. The successful combination is (back row from left) manager Kaye Sycamore, Clora Quinlan-Thompson, Camryn Potangaroa, Abbey Johnston, Molly Wheeley, Talei Pelasio, Grace Namana, coach Lauren Piebenga and (front row from left) Kiana Pelasio, Kate Hartley, Julia Law, Meg Sycamore. PHOTO: GREGOR RICHARDSON
College was in the premier A final for the first time since 2014 and it was not about to let the opportunity slip away.

It was up against Southern Magpies which has featured in four out of the past six premier A finals but College yesterday claimed victory 60-56 following a mammoth 70-minute tussle after extra time was required to break the deadlock.

College initially went out to a 3-0 lead, and then built that up to 8-2. It maintained this until halfway through the first period when Southern gained some momentum through a Lauren Pickett intercept.

Some classy ball movement on attack from Southern helped it eat into the College lead to go into the first break at 13-13.

At the start of the second quarter, College put a mini run of goals together to go out to a 17-14 lead.

Southern capitalised on an error to bring it back to even before College put its foot down with a run of five goals. A nuggety Southern showed good patience on attack to work the ball into its shooters.

Goal shoot Hannah Riddle-Pelchen played well and was a strong target for the girls in black. After some back and forth, College went into halftime leading 25-24.

Southern continued to win the rebounding battle, specifically at its attack end, as the College defenders were unable to capitalise on several missed shots that Sophie Erwood was able to grab.

Kiana Pelasio entered the game replacing younger sister Talei in the goal attack bib which changed the dynamic in the attack end for College.

The third quarter ebbed and flowed with neither team being able to create any real momentum but several mini runs of goals meant the game see-sawed.

Lisa Lin was her standard disruptive self in the defence end for Southern, grabbing multiple tips and intercepts. With increased possession, Southern led 40-37 at three-quarter time.

College lifted its game in the fourth quarter and the connection between Pelasio and goal shoot Grace Namana came right with some great interchanges and movements in the circle.

The physicality of the match appeared to be catching up with both teams as players tired and made poor decisions with ball in hand. Tensions were running high and several players were cautioned for questioning the umpires’ calls.

With five minutes remaining, Southern still held a three-goal lead, but three minutes later ,it was all tied up again thanks to some outstanding defensive pressure. At fulltime, the scores were locked at 49-49, forcing extra time.

An intercept from Erwood for Southern gave it the advantage in the early stages but it was unable to maintain the lead. A poor pass over the head of Riddle-Pelchen gave College the opportunity to bring the scores back to 53-53 at the end of the first period of extra time.

College dominated the second period as wing defence Molly Wheeley and Clora Quinlan-Thompson both snaffled intercepts which were converted.

The final score of 60-56 gave College its first win in the Dunedin pemier A competition.

Grace Namana also anchored her team in the goal shoot bib, slotting an impressive 47 of her side’s total at 90%.

It was a truly physical match in which neither side gave an inch for the entire match.

College coach Lauren Piebenga said she was "exhausted after the tough encounter".

"It really could have gone either way. It was a real see-saw for the full 70 minutes. It was the small errors that made the difference in the end."