Gina Crampton
It is meant to be enemy territory.

But for a trio of Northern Stars players, tomorrow’s match against the Southern Steel at the Edgar Centre will be a sort of homecoming.

Long-time Steel wing attack Gina Crampton returns for her first game in the South since moving to the Stars this year.

Shooter Jamie Hume is from Central Otago and began her career with the Steel, while veteran defender Anna Harrison (nee Scarlett) played for the now-defunct Otago Rebels.

Crampton, who lived in Dunedin from 2010-20 and spent nine of those years with the Steel, said it felt "weird" to return as the away team.

"I actually thought about that today and wondered how many club games, trainings, Otago, Steel I would have been there thousands of times I reckon," she said.

"It will definitely feel familiar, but then I have to walk to the other bench so that’s going to be very weird. I hope they don’t boo me when I walk on."

The Stars have had a strong start to the season and enter the game at the top of the ANZ Premiership table.

They have lost two of their past four games, losses Crampton described as a "reality check".

Despite the Stars racking up a 14-goal win last time they beat the Steel, Crampton was anticipating a tough encounter against an in-form Steel team boasting three wins on the trot.

"The Steel are doing so well ... they’re a really exciting team and they are third on the table for a reason.

"They are playing good netball and we’re expecting a tough battle just like the last time we played them.

"We’re just going to have to really bring it to them."

Despite her familiarity with the team, five new recruits in the 2021 Steel squad added an element of the unknown.

"It doesn’t feel like the team I was in for so long when it is so fresh with new faces.

"But there’s obviously players like Shannon [Saunders] and Hooch [Te Huinga Reo Selby-Rickit] who do feel like home to me as well."

The game is scheduled for 5.15pm tomorrow. 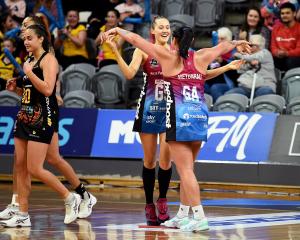 By the skin of their teeth