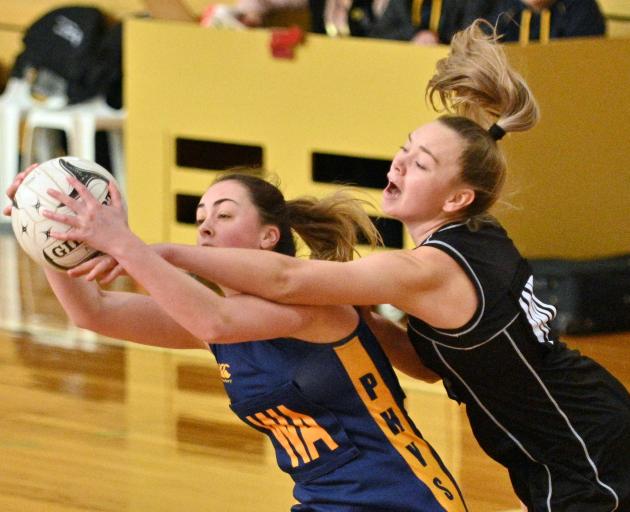 In semifinals at the Edgar Centre on Saturday, College A prevailed over a nuggety St Hilda’s 48-41 and Southern downed Phys Ed A 43-34.

In the first game, an error from the College attack end gave St Hilda’s the chance to break and it scored to take an early lead.

Some uncharacteristic misses from the College shooters, Pelasio sisters Kiana and Talei, allowed St Hilda’s to extend its lead in the first quarter, going into the break up 10-7.

St Hilda’s came out strong with another break to take it to a six-goal lead.

A rebound from College swung the momentum, scoring three times in 40 seconds.

It showed speed on attack and was able to score quickly.

St Hilda’s also showed its quicker side at times, with Grace Southby creating space for herself one-on-one in the circle for her feeders to feed from the centre third.

Both goal keeps made things hard for the shooters.

But Julia Law grabbed an intercept with a minute to play to add to College’s lead going into the final break up 37-29.

It held that lead in an even game that came down to crucial moments.

Semifinal two went goal for goal for three minutes before an intercept in the midcourt gave Physed the opportunity to go up one.

But it failed to convert off its centre pass.

It took until the eighth minute for Physed to convert a break into a lead, going up 10-6 with two minutes left in the first quarter and left Physed up 11-8 at quarter time.

Bridie Burns grabbed an intercept for Southern, then it scored off the centre pass to bring it back to even just over a minute in.

Physed worked back into the game with tenacious defence, but Southern put the foot down just before the break to lead 19-17 at halftime.

Miscommunication in the Physed attack end created an error that Southern pounced on to build its lead to 22-17 within the first minute.

Again Southern’s shooting was not flash but the ability to rebound got it out of trouble.

It went up 29-19 halfway through the third quarter.

Physed again fought back, going into the final break down 33-28.

The final quarter went goal for goal for the first nine minutes.

But a missed shot from Physed, that Penny Johnston rebounded for Southern, started the roll that took Southern to the finish, 43-34.

In the other games, Physed B beat South Pacific Titans A in a convincing 49-25 performance to give them a spot in the fifth v sixth playoff.