Move south to Steel prompts feeling of freedom for Burley 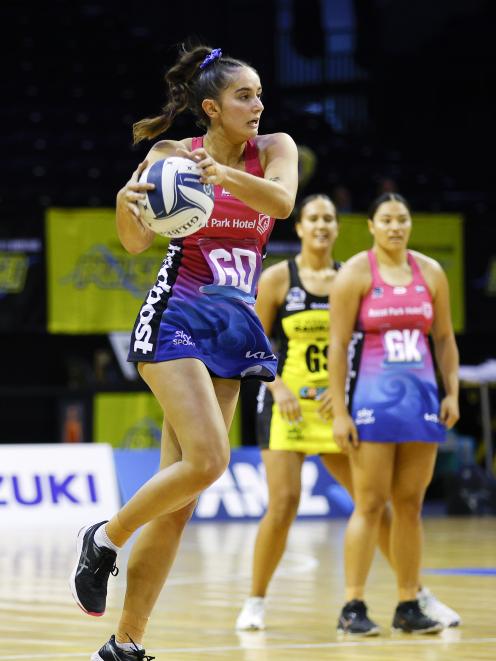 Steel defender Kate Burley in action against the Pulse in Wellington earlier this season. PHOTO: GETTY IMAGES
The freedom to be herself has prompted an evolution in Kate Burley this season.

Burley is a work in progress but her performances for the Southern Steel speak volumes about the impact of her move south from Auckland.

“It’s been really cool learning the structures at the Steel but also to know I can go out of those structures if I see ball," the defender said.

"It’s about having confidence in myself to just go and find something and attack ball.

“I feel like last year I was so caught up in a structure and so caught up trying to do the right thing that I almost wasn’t getting ball. So it’s been really cool to play freely and try and attack stuff. I do love to hunt.

“I’m relatively happy. I really want to step up in the last few games and just make sure I’m getting some good ball and working hard, especially focusing on my attacking game and making sure I’m contributing through court and driving hard.”

“As a unit we’re still building and that’s really exciting. Hopefully that momentum continues over these last few games when it really matters.

“Hooch is amazing. She tells me what to do and always gets her body in the perfect place and I’ve just got to run my feet and try and get something.

"She’s so awesome to work with and I love learning off her. She knows so much about netball so I’m just trying to pick her brain whenever I can.

“We all have different strengths. Fina and Hooch are just so strong under the post. Fina is really good at coming through for the ball and she’s got quick feet, and Hoochie’s so good at being in the perfect space and having the claw out to just pull those balls in.

“I try and use more of my speed. I think we all complement each other and we all play different games depending on which combination is out there. It’s really cool that we can change it up and have different styles of defence.

“We’re not the tallest trio but it just means that we play a different game and I think it works to our advantage. We play with a lot of speed and when we execute that speed it’s really awesome.”

The Ascot Park Hotel-sponsored Steel’s latest win, the 51-49 triumph over the Magic, was an important one as the quest for an ANZ Premiership final berth heats up.

“It was good to grind it out and get that win," Burley said.

"It was really awesome to see that we could finish out that game and step up in that last quarter when we were down on the scoreboard.

"In the last couple of games, that’s continued downwards and we’ve let other teams get the best of us so it was cool that we could step up and get some ball and convert it.”

The southerners now face a double-header against the Pulse and the Magic at Stadium Southland this weekend, and Burley is determined to make it a success.

“It’s just a consistency thing. Against the Magic it was a really tight game and we were able to embrace that pressure and push forward, so we will be looking to do that. It’s going to be two tough games.

“The Magic will be coming back at us and we have a point to prove against the Pulse so we need to make sure we have a full 60-minute performance against them.

“I think it will be a really good challenge for us and it will be interesting to see how we step up to that.”